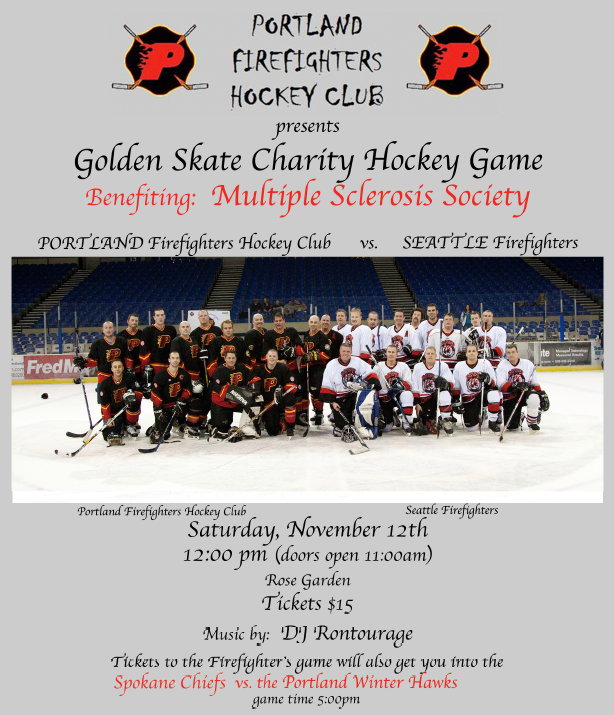 Members of the Portland and Seattle Firefighters Hockey Clubs are hitting the ice to raise money to benefit the Multiple Sclerosis Society of Portland, Oregon (MSSP). MSSP is a nonprofit organization whose mission is to enrich the quality of life for everyone affected by multiple sclerosis and is supported through tax-deductible private contributions, bequests and grants.

Doors open at the Rose Garden at 11:00 am on Saturday, November 12, 2011, with game time between Portland and Seattle firefighters beginning an hour later. Tickets are $15.00, and will provide access not only to the Firefighters hockey game, but to the 5:00 pm game that night between the Portland Winterhawks and the Spokane Chiefs.

To purchase tickets before the game, contact PFHC Captain Monte Schierling at (503) 957-4076 or by email at pfhc@live.com.

The Portland Firefighters Hockey Club (PFHC), formed in July 2004, has competed in multiple tournaments, winning one championship in June 2005 and raising and contributing money to the National Childhood Cancer Foundation, ALS foundation, Oregon Burn Foundation, MDA, and other local charities.

Four years ago, I went numb from the waist down. After quite a few MRI’s, spinal tap, I was diagnosed with Multiple Sclerosis. I was on Avenox for almost 2 years, i had 1 year of monthly steroids IV, had to stop due to hip pain. Through my physiotherapist i learnt about a MULTIPLE SCLEROSIS HERBAL TREATMENT from K.H.C (Kykuyu Health Clinic) and their success rate with the treatment, i immediately started on the MS treatment, i experienced decline in major symptoms including hand tremor, back pain, difficulty walking, muscle paralysis and weakness, uncomfortable tingling and burning, fatigue, urinary retention,double vision, slurred speech difficulty swallowing, numbness. Visit www. kykuyuhealthclinic. com. I knew that a positive attitude is everything and to just believe, I’m in control of my life again….

My Multiple Sclerosis symptoms started out with muscle weakness and slurred speech. I could not tolerate the medications prescribed for long. I started on MS Herbal Treatment from VHC, the herbal treatment immensely helped my Multiple Sclerosis condition, i had a significant recovery with this natural treatment. WhatsApp +17278553511 Email: drsimagomez @ protonmail . com