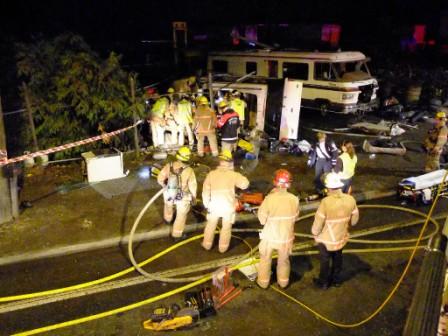 At 4:40 am, Portland Fire & Rescue responded to a single vehicle accident at NE 60th Ave.and NE Portland Hwy. Upon arrival, firefighters from Portland Fire Station 12 (Sandy Blvd.) found a white Ford SUV on its side. The vehicle apparently collided with a two-foot diameter tree at a high rate of speed. 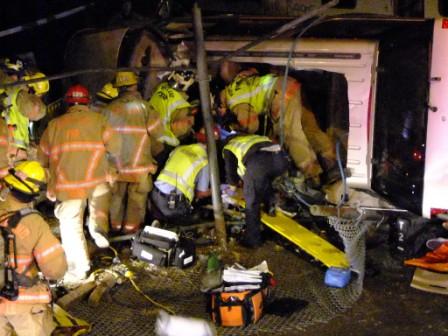 Two individuals - a male and female - were trapped inside the vehicle that was wedged against the tree.  Firefighters had to cut off the top of the SUV and within a few minutes were able to access the female patient on the passenger side.  The bigger challenge for fire crews was to access the male driver.  As a result of the crash, the vehicle was on its side with the driver's side down and wedged up against the tree.  The driver was trapped in a tight spot inside the SUV.  Firefighters eventually called in two trucks to gently pull the vehicle away from the tree and slowly put it upright on its wheels.  At that time, firefighters used the Jaws of Life to extricate the driver. 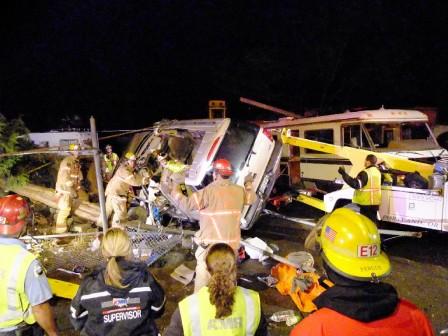 "This was the most technical extrication I've seen in my career," said Captain Ryan Fox, a 12-year veteran of Portland Fire & Rescue.  "Normally, we will have someone out of a vehicle in minutes.  The driver was so severely pinned that it took us over an hour to reach him."

Both the driver and passenger were transported to Emanuel Hospital with life-threatening injuries.