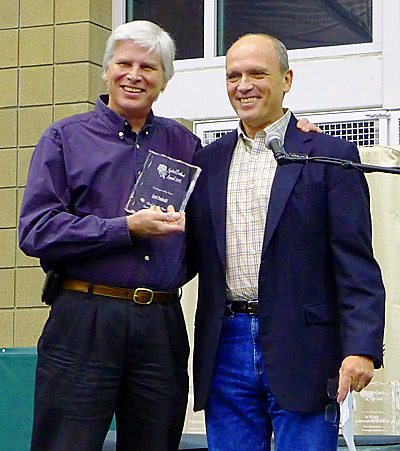 On Thursday, October 27th at the East Portland Community Center, community and neighborhood leaders who contribute to the thriving civic life in the City of Portland were recognized and honored with 2011 Spirit of Portland awards. Awards were determined by a selection committee of representatives from the Mayor’s and City Commissioners’ offices, the Office of Neighborhood Involvement, the Neighborhood District Coalition offices, Business Associations, diverse non-profit community organizations and past award winners.

During the ceremony, Portland Fire & Rescue’s (PF&R) own Kent Powloski was presented with the “City of Portland Employee of the Year” award. Kent, PF&R’s Video Production Manager, has worked for Portland Fire since 1981, managing and operating Portland Fire’s video production facility and closed circuit video system.

Kent was presented the award for his diligent work in accumulating and placing specialized ham radio equipment and kits in all 30 city fire stations.  Below is the write-up that was read as Kent received the award:

“In 2007, a citywide project for all the city fire stations to have ham radios for all fire stations was assigned to Kent Powloski in 2007 for completion. At that time, only ten stations had the critical equipment for addressing emergency preparedness when the Northwest Industrial Neighborhood Association (NINA) inquired about the project’s status. Kent approached his assignment with hard work and innovation to successfully compile 36 kits for each of the current fire stations in the city.

With his personal knowledge of electronics and ham radio equipment, Kent collaborated with Portland Fire & Rescue, the Portland Office of Emergency Management, Multnomah County, NINA and the Neighborhood Emergency Team community to successfully assemble the kits. The kits exemplified considerable thought and creativity, not only having three backup alternatives for power and antenna, but being so user friendly that a novice can operate them in an emergency situation.

The radio equipment, user manuals and emergency communication supplies are in a sealed and protective case that is safely stored at each fire station for use in adverse emergencies. Kent’s efforts have increased the safety for everyone in Portland in the event of a catastrophic event. These radios (called Go Kits) at each fire station will provide vital communications during an emergency situation thanks to Kent, who continues to improve and provide additional kits.”

Congratulations to Kent Powloski for his award and making a positive difference in the Portland community!