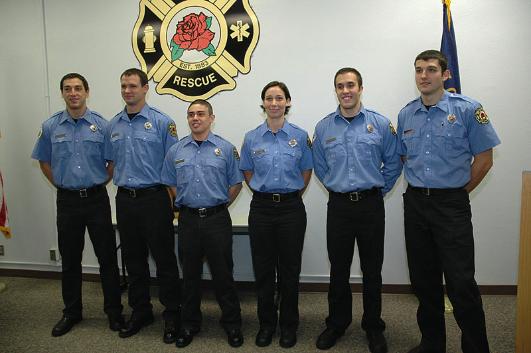 Congratulations to new Firefighters James, Jin, Zachary, Jason, Travis, and Tamara and welcome to the family!

Early yesterday morning, six firefighter recruits were officially sworn in and presented with PF&R badges in front of family members, friends, PF&R firefighters and command staff. Fire Chief Klum acknowledged the class’ accomplishments and personally thanked the recruits and their family members for their commitment while urging them to continue in their fire-service education and be safe.

The road for these young firefighters has been long. Members of Class 10-05 successfully completed an eight-week Training Program and a 16-week Recruit Academy. Class 10-05 then transferred to Station 2, a working fire station in the City of Portland.

Under the supervision of firefighter specialists and training officers such as Captain Budge, the firefighter recruits spent three months training on Station 2’s engine company, then three months on Station 2’s truck company.  During that time, they learned Emergency Medical Service protocol, practiced challenging scenario based evolutions, and responded on emergency calls in the community.

The six successful Firefighter Recruits from Class 10-05 will now be transferred to stations around the City of Portland where they will spend another eight weeks of independent learning and continuing evaluation.