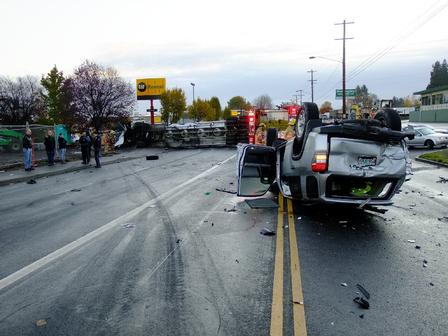 On Friday, November 25, 2011 at 7:06 am, Portland Firefighters responded to a multiple vehicle crash involving a semi-truck and two SUVs on NE Columbia Boulevard at Northeast 42nd Avenue. Firefighters on scene determined that one person was fatally injured in the crash and waited for the Portland Police Bureau's Traffic Division Major Crash Team to conduct an investigation.

"As our responding crew approached the vehicle most impacted by this crash, they saw car seats and shopping bags inside. We knew this was a young mother who had been out shopping on Black Friday morning. That made today's accident even more sobering and difficult for firefighters," said Portland Fire Battalion Chief Merrill Gontermann. 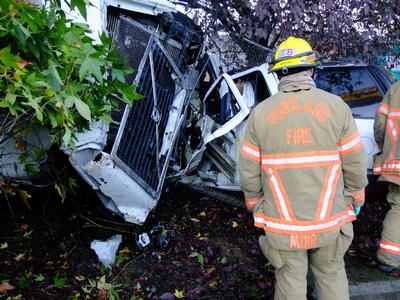 According to reports, around 7:00 am, a fully loaded semi-truck was traveling east on NE Columbia Boulevard near NE 42nd Avenue. The truck and one of the SUVs collided, causing the truck to slide sideways into another SUV driven by a 28-year-old female - the vehicle's only occupant.

Due to the impact of the truck and second SUV colliding, both vehicles traveled down Columbia Boulevard another 50 yards. At that point, the truck tipped onto its side, crushing the vehicle. Upon arrival, firefighters found the semi-truck driver uninjured and in shock. One occupant in the other SUV was also uninjured in the crash.

"We're firefighters. When we arrived at the scene, we wanted to save lives. There was nothing we could do for this young woman except wait for police to complete their investigation," remarked Gontermann.

After Portland Police completed their investigation around 1:45 pm, firefighters from North Portland (Kenton) Fire Station 8 went to work. Although their job would not result in a life saved, they worked with the conviction that it would give this young woman's family the opportunity to begin coping with her death. A tow truck lifted the truck off the SUV and firefighters began working with special tools, including the Jaws of Life, to carefully extricate the victim. 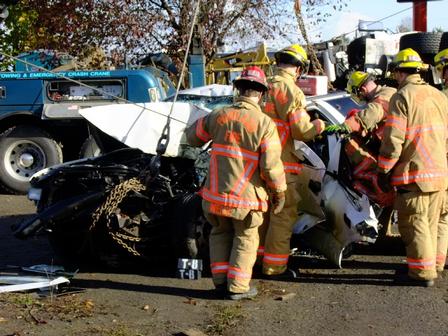 "As firefighters, we know life can change in a second. Responding to accidents like this is part of our job. And some days, it's a very sad job," said Portland Fire Captain Phil Dearixon.

Volunteers from the Trauma Intervention Program (TIP) responded to the scene. Firefighters involved in responding to today's accident will receive the opportunity for any support services they may need in coping with this tragedy. Portland Fire & Rescue wishes to extend its deepest condolences to the family of the victim.