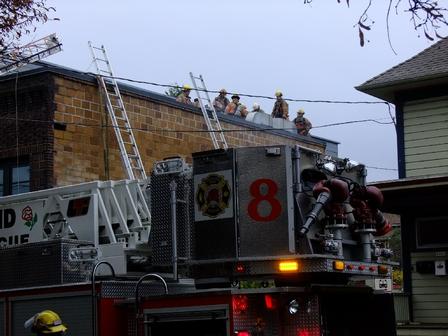 Portland Fire and Rescue responded to reports of smoke inside the Interurban Tavern at 4057 N Mississippi Avenue at 9:54 this morning. When Portland Fire (Kenton) Station 8's truck and engine arrived at 10:00 a.m., they immediately noticed smoke coming from the roof vents. At 10:02 a.m., the Incident Commander asked for more firefighters to come help find and fight the fire they knew was burning somewhere in the building.

Firefighters entered the tavern with their hand-held thermal imaging camera and began searching for the fire. Firefighters could smell wood burning and they knew there was a fire somewhere hidden in the building. Truck 8's crew started punching or cutting holes in the walls where the thermal imaging camera was showing high heat while Engine 8's crew was hooking up their fire engine to a fire hydrant and dragging hose lines up to the second floor. Firefighters discovered that the fire had started in an outside wall of the building and traveled up through open spaces inside the wall to the attic where the fire grew bigger.

"When a fire is inside the walls of a building, it travels through the openings inside those walls and can spread quickly," said Portland Fire & Rescue Chief Robert Zavodsky. 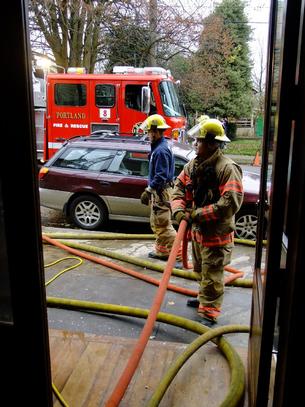 The Incident Commander called for a 2nd alarm (additional firefighting crews) to assist in containing the fire and extinguishing it quickly. With the additional crews, they were able to stop the spread of the fire by 10:35 a.m. which enabled the Incident Commander to send most of the 2nd Alarm crews back to their areas within the city. However, two additional truck crews were kept on scene for a time to minimize the damage to the business. Fire crews did not leave the scene of the fire until 12:40 p.m.

PF&R's firefighting crews focus primarily on evacuating or rescuing residents. We don't want to have anyone hurt or injured by a fire. Our engine crews specifically focus on hooking up to hydrants, pulling hose lines to where the fire is located, and extinguishing the fire. Truck crews focus on opening up the interior of the building so that water can be sprayed onto the fire, cutting open the roof for ventilation and/or extinguishing the fire in the attic, and placing plastic over valuable contents to minimize water damage from fighting the fire. 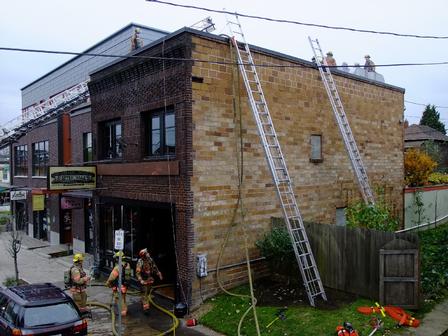 "In this fire, the fire was in the walls and attic. Due to PF&R's truck crews opening up the right part of the wall and attic, engine crews were able to get water on the fire and stop it from spreading further and causing greater damage to the building," said Zavodsky.
Portland Fire investigators determined that the cause of the fire was electrical in nature.

No one was hurt or injured by this fire.