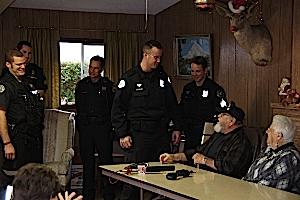 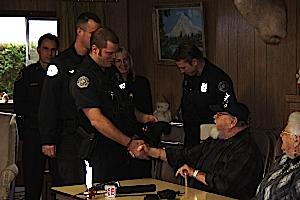 This morning at the Maple Lane Mobile Home Park in Oregon City, veteran James McCabe was reunited with and had the chance to thank Portland Police Bureau Officers Darke Hull and Brian Sweeney, Nurse Susan Voegtlin, and Portland Fire & Rescue (PF&R) firefighters from the Rose City/Hollywood Fire Station 28 for saving his life.

Just over two weeks ago on Veterans Day (November 11, 2011), a group of veterans were gathered at the McDonalds located at NE 40th and NE Hancock. All were planning to attend the Veterans Day Parade on NE Sandy Blvd. Around 9:00 am veteran James McCabe, age 74, became ill and collapsed on the floor of the McDonalds. Luckily for Mr. McCabe, two Portland Police officers were nearby and came to his aid.

Having been trained in First Aid and CPR, Officers Brian Sweeney and Darke Hull immediately began to evaluate and assess McCabe's condition. They noted he did not have a pulse and did not appear to be breathing. Officer Sweeney began chest compressions based on his training following American Red Cross guidelines. 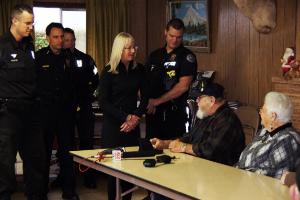 A citizen, Susan Voegtlin, identified herself as a nurse and asked if she could assist. Officer Sweeney directed her to begin rescue breathing on McCabe as he transitioned back and forth with Officer Hull in administering chest compressions. Portland's Bureau of Emergency Communications dispatch was advised by Officer Sweeney that they needed Fire/Rescue to the scene immediately; they continued CPR until PF&R arrived. 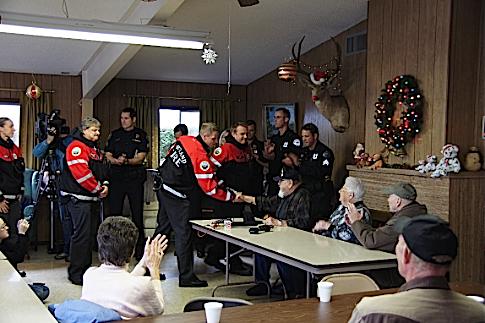 Firefighters from PF&R's Hollywood FireStation 28 arrived within minutes to start advanced life support. Within 10 minutes the crew was able to help Mr. McCabe regain a pulse and a blood pressure. Mr. McCabe returned to spontaneous circulation and was transported to Providence Portland Medical Center where he was admitted to the Intensive Care Unit.  McCabe has since recovered and is now back home.

Portland Fire & Rescue and the Portland Police Bureau urge all citizens to become CPR trained and certified because it can save lives. Visit the American Red Cross website at www.oregonredcross.org to sign up for classes.