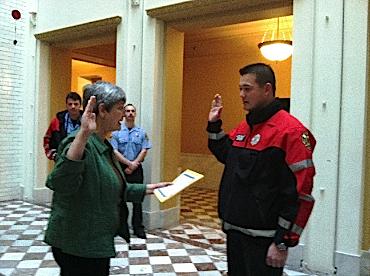 Goforth is officially sworn in as a Fire Captain

During a formal swearing-in ceremony at Portland’s City Hall this morning, Portland Fire & Rescue (PF&R) appointed Bill Goforth to the position of Fire Captain. The ceremony was witnessed by Operations Chief John Nohr, other Fire Bureau personnel, and family members. 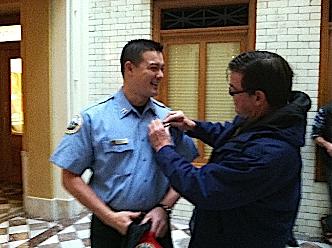 Goforth began his career with Portland Fire in 1998 and has worked at fire stations across the City of Portland, most recently at Stations 1, 8, and 12. In 2004, Goforth was promoted to the rank of a Fire Lieutenant. As a Fire Lieutenant, Goforth was responsible for supervising Station 1 firefighters when working at a fire scene or other emergency. At that rank, he also organized and supervised the day-to-day tasks at Portland’s Downtown Central Fire Station 1, and provided training on safety procedures and fire equipment to firefighters.

Goforth is a member of PF&R’s Dive Team and Technical Rescue Team. 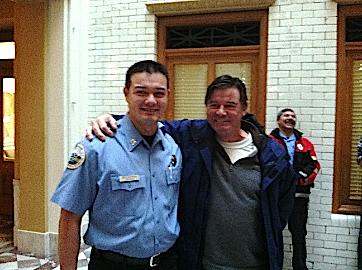 As PF&R’s newest Captain, Goforth will be responsible for the direct command over firefighting personnel in a fire company, for the discipline and commendation of personnel, and for the proper maintenance of apparatus, equipment, and the fire station on an assigned shift as well as other shifts. Work differs from that of a Lieutenant in that the Captain is the administrative officer of the station and in that capacity is responsible for channeling directives from Headquarters to subordinates. Read more about a Fire Captain’s scope of responsibility here.