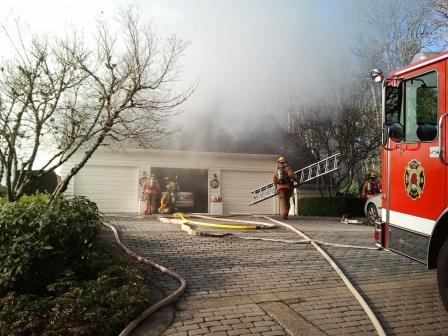 At 11:50 am, firefighters from Portland Fire's (Sylvan) Station 16 responded to an automatic home alarm at 5735 SW Grover Ct.  Upon arrival, firefighters saw smoke through the windows and coming under pressure from the doorway. 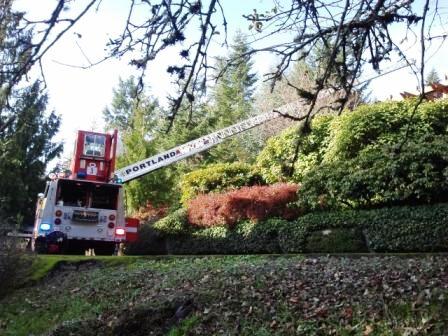 They immediately called for a full residential fire response.  As additional fire crews arrived from surrounding fire stations, firefighters began laying 1,000 feet of hose lines from hydrants on SW Grover Ct. all the way up a steep and winding driveway to the multi-million dollar property. 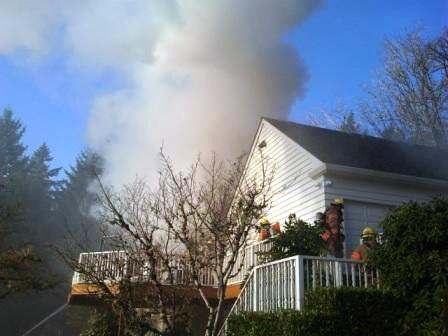 The 6,000 square foot home was partially involved in flames and thick smoke.  At 12:08 pm, Incident Commanders called for a second alarm response bringing additional resources, crews and apparatus to the scene.  Initially, fire crews fought the fire from a defensive position as they developed a plan of attack and crews positioned for an interior attack.  Crews from Engine 16 aggressively knocked down the main body of fire in the living room on the second floor of the three-story home.  Other firefighters pulled additional hose lines, laddered up to the roof to cut vent holes, and extended a fire truck aerial up the hill for a defensive firefighting operation. 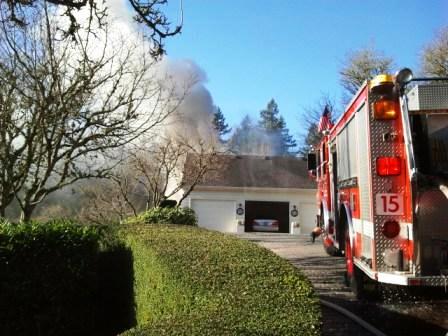 This fire required a joint response between TVF&R and PF&R.  Portland Fire arrived at the fire first, and then discovered it was TVF&R's area.  Because of mutual aid agreements, a flawless response from both agencies was executed to battle this blaze.  Approximately 60 firefighters and other personnel responded to the scene.  TVF&R will complete the fire investigation. They have investigators on scene working to determine the fire cause and damage estimates.  No one was home at the time of the fire and no one was injured. 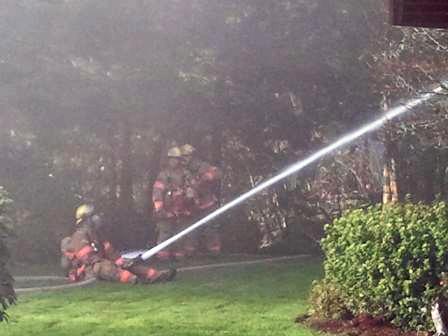 Portland Fire & Rescue is currently responding to a 2nd alarm fire at 5735 SW Grover Court. The Public Information Officer is en route. Additional information will be posted as it becomes available.