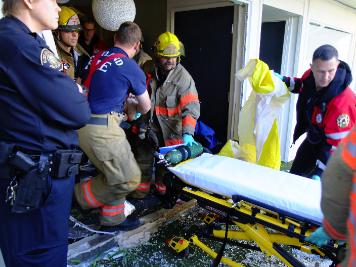 At 10:54 am, Portland Fire & Rescue was dispatched to reports of a vehicle into a building at the Jupiter Hotel, located at800 East Burnside Street.  Firefighters fromPortland's Old Town Fire Station 1 arrived at the scene within three minutes of receiving the call. 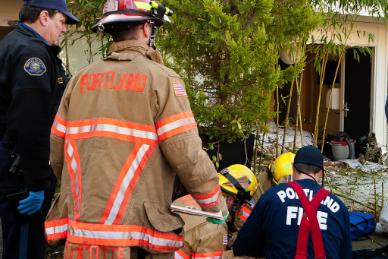 One police officer and three maintenance workers were able to lift the taxi cab off the bed, freeing the man trapped underneath prior to firefighters' arrival.

Firefighters discovered that a taxi had crashed through one of the hotel rooms and pinned a man inside.  The patient, Jon Toubin - age 40, was treated by firefighter paramedics and transported to an area hospital with life-threatening injuries.  The driver of the taxi cab may have suffered a medical emergency prior to the crash and was also transported to the hospital.

Portland Police is conducting an investigation into the cause of the accident.