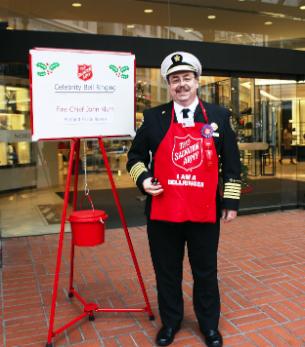 Look for Fire Chief Klum tomorrow in front of Nordstrom and make a donation to support the efforts of The Salvation Army!

The head honchos of large corporations' in Portland will be showing their support for The Salvation Army in an annual Celebrity Bell Ringing Challenge.

On Tuesday, December 13, 2011, top executives from competing companies will be ringing next to each other in downtown Portland to see who can fill their kettle with more money.  From 11:00 am until 1:00 pm, charisma and enthusiasm will fill the entrances to the downtown Nordstrom (Broadway entrances), the downtown Macy’s (Morrison entrances) and the 5th & Morrison entrance to Pioneer Square Mall as each executive tries to convince Portlanders to donate to their kettle; each will be competing with other celebrity bell ringers who will be working the same crowd!

Going head-to-head on December 13th are the following executives:

The executives will earn bragging rights and be able to say that their friendly competition contributed to The Salvation Army’s biggest fund-raiser of the year.  Last year, this competition raised $17,832.84!

The money raised each year in the Red Kettle Campaign goes directly to The Salvation Army’s 10 social service centers (Corps) and programs in the Metro area which serve everyone from babies to seniors.  Actually, more than 60% of all funds raised by The Salvation Army during the year comes during the last quarter of the year, primarily through these kettle efforts.  Last year’s Red Kettle Campaign raised nearly $700,000 in the Portland-Metro area.

Citizens are encouraged to stop by one of these stores on December 13th and drop a few coins or dollars into the kettle you want to support (hint hint – Portland Fire’s Kettle)!

Who knows?!  Perhaps, with your support, these celebrities can help the 2011 Red Kettle Campaign by bringing in $50,000 themselves!