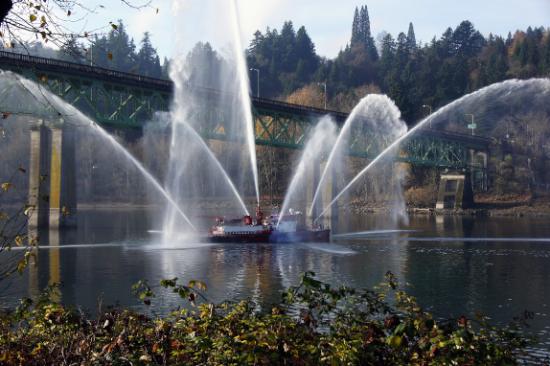 This month, work will begin on the $268 million project to replace the 86-year-old bridge. The ground breaking event this morning officially announced a $17.7 million federal TIGER grant for the project from the U.S. Department of Transportation. The Sellwood Bridge was the only project in Oregon to receive a TIGER grant and received the 7th largest grant out of 46 awards.

Portland Fire & Rescue’s Station 6 (NW Industrial) brought out the Fireboat David Campbell to cap off the celebration with a water display.

For additional information on the project, visit http://www.sellwoodbridge.org.

The Fireboat David Campbell was built in 1927 and is 87'6" long.  It was repowered in the 1970's, and currently has diesel propulsion engines and diesel dedicated pumping engines. The fireboat’s four fire pumps have a total output of 15,000 gallons per minute, the pumping capacity of 10 fire engines, and its main turret alone can flow approximately 7,500 gallons per minute.