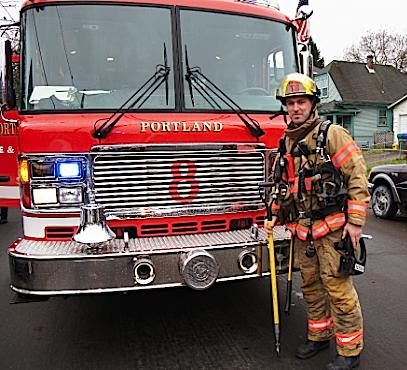 Portland Fire & Rescue is pleased to announce that Firefighter Jeremy Fraijo has been selected as the recipient of the “2011 Safe Driving Award” sponsored by the City of Portland Risk Management.

Firefighter Fraijo was hired in August 1999 and currently serves on the Truck at Station 8 (Kenton/Piedmont), A-Shift in North Portland.  Here at Portland Fire & Rescue, Fraijo is a tillerman and works on PF&R's Wildfire Strike Team. Fraijo drives and helps maintain Station 8’s fire truck and has an impeccable driving record.

Firefighter Jeremy Fraijo will be receiving a Letter of Commendation at Portland Fire & Rescue’s Award Ceremony in the Spring of 2012 as recognition of his achievement as Safe Driver of the Year 2011!

Bravo! Hat's off to Jeremy Fraijo. These guys put their lives on the line every day. The least we can do, as drivers, is get out of their way when we see them, or hear their sirens. They endure enough risk without having to deal with drivers. Again, congrats to Jeremy.