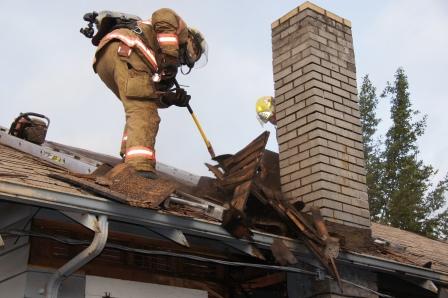 At 2:50 pm, Portland Fire & Rescue was dispatched to reports of a residential fire at 3532 SE 62nd.  Firefighters from Portland Fire Station 25 (Woodstock) arrived first on scene and found smoke coming from the attic of the home.  The homeowner told firefighters that she was home and had a fire going in the fireplace all day.  Around 2:45 pm, she started seeing smoke coming out around her ceiling next to her fireplace. 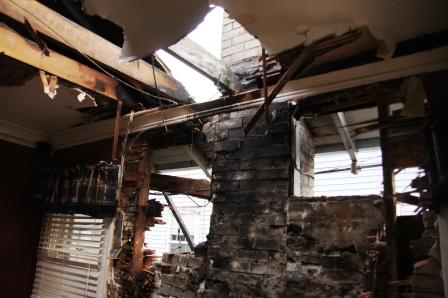 Firefighters on scene determined that the fire got out of the firebox through small holes in the mortar next to the bricks.  The fire then spread up into the attic of the home and through the roof.  The truck crew assigned to this fire was instrumental in quickly laddering to the roof, cutting holes to vent the smoke and heat, and finding and extinguishing the fire that had spread into the attic.  Firefighters brought the fire under control at around 4:00 pm. 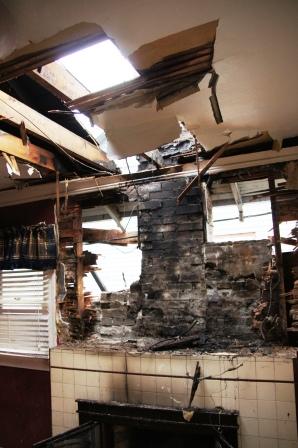 The home, built in 1927, has its original fireplace, which the homeowner said was checked this past year for safety.  She was surprised there was a problem so soon after inspection.  There was no working smoke alarm in the home at the time of the fire, however all occupants got out safely.

Citizens are reminded to make sure they have a working smoke alarm in every sleeping area of their home.  "Had this fire happened at night when people were sleeping, there could have been a different outcome," said Portland Fire Public Information Officer Paul Corah.  Damage to home is estimated at $35,000.