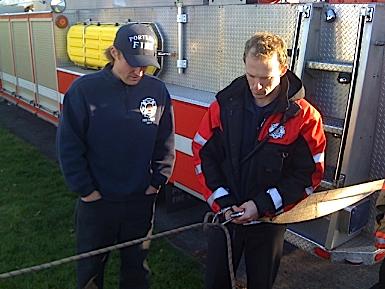 On the afternoon of Sunday, December 4, 2011, firefighters from Portland Fire & Rescue Station 3 (Northwest/Pearl District) and Station 27 (Forest Heights) gathered on the hillside of Chapman School in NW Portland to participate in a multi-company low angle rescue drill. Low angle rope rescues involve the use of specialized equipment to reach victims that have been trapped in a dangerous position, such as over a steep embankment. 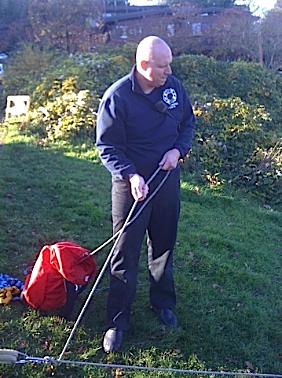 Firefighters began the drill by discussing the proper usage of rope, webbing, hardware friction devices, how to tie ropes to anchors, and the building of lowering and raising (mechanical advantage) systems.  Firefighters then practiced using simple, compound, and complex pulley systems. These types of pulley systems enable firefighters to lift weight loads by applying less force than the load itself over a longer distance. 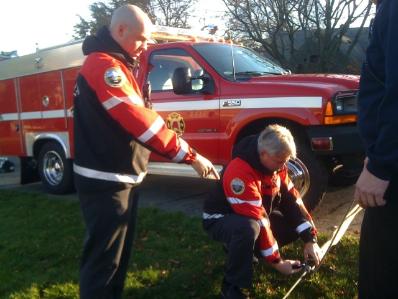 Station 3, known as "The Animal House", is located in the heart of northwest Portland between the Pearl District and NW 23rd Avenue. In 2002, the station's remodel coincided with urban developers and their rediscovery of the Alphabet District as the area steadily blossomed.

What sets Station 3 apart from the rest, besides its nickname, is the dynamic area they serve.  Their first response area encompasses several types of building construction as well as economic and ethnic diversity.  The double company station including an engine and truck get called to residential, commercial, industrial, high rise and tank farm calls as well as up into the West Hills and PGE Park which are all included in their FMA.  Such populated areas keep on duty firefighters in a constant spotlight of the public eye.  Bottom line - while on duty at Station 3, you have to be prepared for anything.

Though Station 3 has a relatively young workforce, it carries on old traditions and houses two of the few remaining fire poles in Portland Fire & Rescue.  With substantial changes in personnel through retirements, promotions, transfers and recruits, the station is still as wild and crazy as a petting zoo living up to the long time nickname.  The firefighters at Station 3 take pride in their "Animal House" and make the most of every shift.

Station 27 started providing emergency services to the community of Forest Heights on July 1, 2006. The station was built in response to a fire station location study completed in the 1990s. Funds to build the station came from the Fire & Rescue Bond passed by Portland voters in 1998. The station was built in a wooded setting and is designed to blend in with the area.  The property that Station 27 sits on actually borders Forest Park. Deer and other wildlife are visible most days from the fire station.

Station 27 houses one fire engine, but due to the close proximity of Forest Park and with many homes built near wooded areas, a brush unit is also quartered here and cross staffed by on-duty personnel as needed.

Station 27 is dispatched by the City of Portland Bureau of Emergency Communications (BOEC), but can also be dispatched directly by the Washington County Consolidated Communications Agency (WCCCA) for mutual aid responses with Tualatin Valley Fire & Rescue.

NW 23rd & Kearny corner trash fire was started by troublesome stranger. Fire has been taken care of but the city can I the stone bin is ruined. Please know if you can relay the help it is appreciated. If not, I will replace the bin myself.

The last message was misspelled.
NW 23rd & Kearny corner trash fire was started by troublesome stranger. Fire has been taken care of but the city can in the stone bin is ruined. Please know if you can relay the help it is appreciated. If not, I will replace the bin myself.

P.S. The stranger is the same individual you have been called on previously, and which most businesses & neighbors probably complain(ed) about. Last seen, after seen starting the fire, at Good Samaritan Hospital Emergency room when I went there to warn the staff ⚕️.

Also, please respond if you have the time and check ✔️ on foot 👣 to see if the trash can is safe until replaced. The fire was real. So glad I was there.