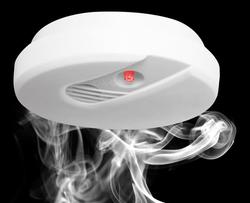 Smoke alarms that are properly installed and maintained play a vital role in reducing fire deaths and injuries. Having a working smoke alarm cuts the chances of dying in a reported fire in half.

Smoke alarms are the single most important item to help you survive a fire. While fire doesn’t have to happen, when it does, early warning is imperative for escape. The smoke alarm laws in Oregon have become more complicated in recent years. Here are the facts to help sort it out and make your life safer.

In January of 1998, Oregon law changed for smoke alarms. Where we once asked citizens to change their smoke alarm batteries each time they changed their clock, the advent of the 10 year lithium battery has changed all that.

ANY smoke alarm that has reached the age of 10 years has lost much of its reliability and should be replaced. The replacement must be an Oregon legal smoke alarm in one of three configurations:

Never change the battery in a new technology smoke alarm. The battery will be good but the alarm unit itself simply does not work reliably for longer than the 10 year life span (dust build up in the sensing chamber, reductions in effectiveness of radioactive elements in ionization types, and failure of electronic components). Smoke Alarms using lithium batteries are not under warranty when the battery is replaced.

Ionization smoke alarms also have a hush feature. This is a button that silences the alarm when nuisance smoke or shower steam accidentally set it off. By pushing the button, it will silence the device for up to 15 minutes before it resets itself. Taking the battery out to silence the alarm is no longer needed!

None of these features reduce the need to test every smoke alarm every month. There is no guaranteed lifespan for a lithium battery so you may only know it is dead when the test does not sound the alarm. Also, new alarms have the date recorded on the back so their age can be tracked.