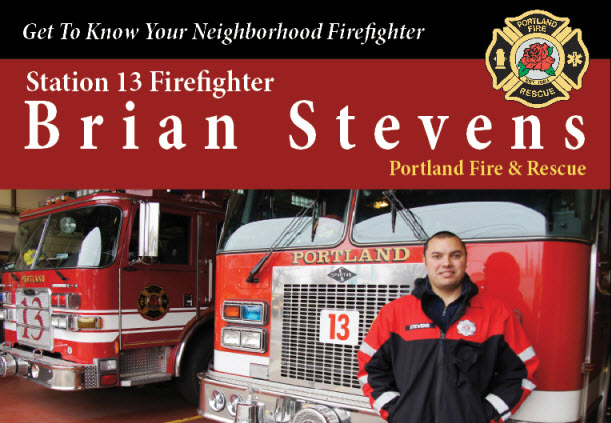 I work on the fire truck at Station 13 which serves the Lloyd and Irvington neighborhoods.  Our station is the first responder to emergency incidents at the Rose Garden and at the Oregon Convention Center. Station 13 houses a truck and engine and responded in 2010 to 4,587 emergency incidents.

I was hired at Portland Fire & Rescue in September 1998.  As a new firefighter, I always strived to work at the busiest stations in order to gain the most experience.  I have been assigned to stations with very diverse FMA's (fire management areas).  This includes Southeast Portland Stations 9, 25, and 28, downtown at Station 03, and the boat stations 6 and 17.

I have also worked on roving Engine 16 that was stationed in Northwest Portland and covered all the stations throughout the city.  Currently, I am assigned to Station 13 which is located near Lloyd Center on NE 10th and Weidler.

On one of my first shifts at Truck 2 (the truck where new firefighters are trained), we responded or were “tapped out” to a report of a residential fire at 4:00 a.m.

The Truck 2 crew and I were responsible for “ventilating” or cutting holes in the roof of the home in order to help release the smoke and hot gases that accumulate near the ceiling or attic space. During this operation, the importance of teamwork became very apparent.

Watching the sun rise from the roof as we put plastic over the ventilation holes and overhauled the house to confirm 100% extinguishment was followed by a feeling of accomplishment.  We had worked hard and saved somebody's home.  I was amazed at the amount of work that went into cleaning the fire area and securing the house.  I was proud to be a firefighter and glad to be part of this team.  I knew at that moment that I had found what everyone hopes for in their life: a way of providing for their family and loving the way they do it.

I have had many calls that I can say are memorable.  One that's always stayed with me is a call to help a baby who was born with the umbilical cord wrapped around his neck. When we arrived to the home, we immediately started CPR and rescue breathing on the baby.  Quickly the baby’s skin turned pink and he began to move his arms and legs.  That sight is something I will never forget.  I have attended birthday parties for the child and it is a great feeling to know that he is alive because of a quick response and good training.

At Station 13, the firefighters all pooled their money and bought a Traeger BBQ/Smoker for the station.  My favorite meal is enchiladas cooked on the Traeger.  I prefer to use pre-cooked chickens because they are quick and already have great flavor.  The key to cooking at the fire station is to make it quick and make a lot of it!

At age fifteen, I got my first job working on a farm doing maintenance. This job gave me a good skill set in working with hand tools and taught me the value of hard work.  I then worked for a private contractor fighting forest fires during the summer.  I spent part of the time on the forest service explosive team and blowing fire line with dynamite.  Later, I worked at Fred Meyers and became the PIC of the building department.  Just before I applied to Portland Fire, I worked for Coast Crane and Equipment, becoming one of their lead mechanics and working on hydraulics and electrical repair.  I received my operator’s card for rough terrain forklifts, cranes, and man lifts.  I also became a certified welder and began welding on my days off and working for Northwest Technologies.

I feel that honesty is number one, but always wanting to learn and never settling are also important.  The job of firefighter is so dynamic and there is so much to learn that a 30-year career just scratches the surface.  Being open to others ideas, taking the good from everyone you meet, and continually bettering yourself is a sure way to success.

I have spent the past four summers and winters building my family home with the help of other firefighters and friends. I am looking forward to watching my children enjoy the summer and winter activities in this next year.  I myself enjoy any activity in the great outdoors.

When I first arrive on-scene with my crew, I always try to think of safety.  If a house is on fire, I look for the exits and analyze the layout of the home. When arriving on a traffic crash, I think about apparatus placement to protect the other firefighters and the public.

My dad always use to say, "If you don't have time to do something right the first time, then how are you going to find the time to redo it?"  This saying comes to mind a lot in how I live my life.  I want to do the best I can the first time so that I can spend the rest of the time not stressing about things I have already done and I can concentrate on the things that I still need to do.  I also follow the motto, "Treat others as you would like to be treated yourself."  These two sayings have been a good foundation for success.

Brian is a great example of a Portland FF who does the job the way it should be done. With pride and courage. We are not hero's. We're firefighters..

Keep up the good work and stay safe.

The kids and I are very proud of you sweetheart! This is a great story of an honest, hardworking man that LOVES his job and what he does for his community!

I'm glad you love your job Brian, watching our dad be a Portland Firefighter and Deputy Chief certainly made me understand the importance of this profession as well. Dad made us understand the value of hard work, careful planning and dedication, everything being a firefighter embodies. Treating others the way you want to be treated is so true, I say this to my kids all of the time...but more importantly I show them. Love, Your Sister

Can I look up a name of someone that says he retired in 1991 from the fire department. I've looked and searched and see no records of him being a firefighter.
Thank you
Aliza

My Dad also served at station 13 1957-1970. They also pooled $ for their food. They had a shift schedule as to who cook on their shift. My Dad's was clam chowder. The guys would go clam digging and take the families. We had a good life. Thank you for your service! Is the shop and pop machine still there? No more cots, lol! Times have changed!