Portland Fire & Rescue Firefighters rescued a man after he fell through the ceiling of his Southwest Portland apartment about 3 p.m. today.

Chris Brady, 30, was carrying a heavy TV at his home, 5041 S.W. Beaverton-Hillsdale Hwy., about 3 p.m. when he stepped on a "spongy area of the floor, said Paul Corah, a spokesman for Portland Fire & Rescue. The floor collapsed and Brady fell, the top half of his body remaining in the hallway while his legs dangled through the ceiling of the living room below. 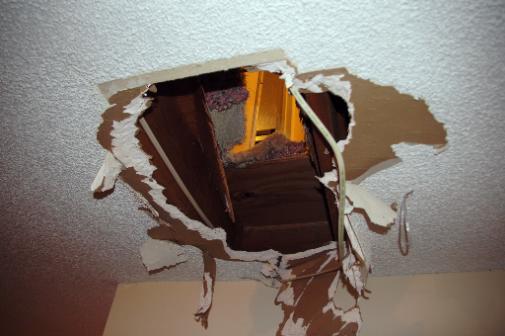 Firefighters "scratched their heads a little bit" while trying to decide their approach, Corah said, but eventually set up a small ladder under Brady's feet. He was able to push up against the ladder with his feet as firefighters pulled him up from his arms and was freed about 10 minutes later.

Brady was taken to an area hospital for injuries to his abdomen and chest, but Corah said he should recover.