Investigators have determined that 41-year-old Jason Ross Brown died of carbon monoxide poisoning as a result of a fire at his residence located at 6219 North Concord Avenue on December 30, 2011.

After the fire, Investigators discovered a marijuana growing operation within the residence. According to the Portland Police Bureau, Ross was a valid medical marijuana card holder but the growing operation was in excess of what he was allowed to legally grow and possess.

Investigators have yet to determine the fire's cause, but estimate that damage to the residence is $225,000. 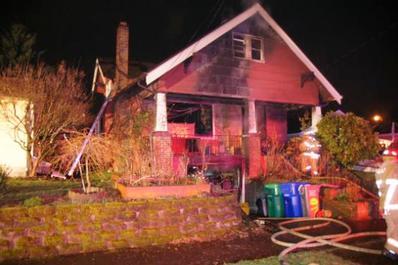 At 7:05 pm, Portland Fire & Rescue was dispatched to reports of a house on fire at 6219 North Concord Avenue.

Firefighters from Portland Fire Station 24 (Overlook/Swan Island) arrived first on scene to find heavy fire coming from the basement and garage, which were beneath the home at street level. With the fire spreading rapidly, firefighters pulled one hose line to the basement and a second to the first floor. When firefighters entered the first floor through the front door, they discovered a middle-aged male on the floor just inside the door who was deceased.

The fire fully involved the basement and was so extensive that it burned a 6 foot by 18 inch hole through the floor between the first floor and basement. This serious safety hazard prompted the Incident Commander to issue an advisory to firefighters on scene.

"A major concern tonight was making sure that the structure was not compromised and that firefighters could safely attack this fire from the interior and continue searching for trapped victims," said Portland Fire Battalion Chief Dan Buckner.

The fire was brought under control at 7:43 pm. An joint investigation between Portland Fire & Portland Police Investigators is currently underway in to the fire's cause and the fire death. Portland Fire & Rescue's arson canine - Lila - has also been brought to the scene to assist in the investigation. Portland's last fire death occurred on October 9, 2011, when a man succumbed to smoke inhalation trying to escape a house on fire that had no working smoke alarms.