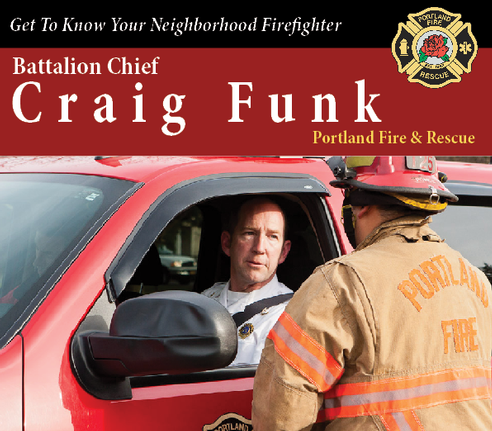 As the B-shift chief in Battalion 3, I serve the communities on Portland's Eastside.  My response area runs from the Columbia River south to Mt. Scott and runs east to west from approximately 75th Avenue to 162nd Avenue and includes Stations 2, 7, 11, 12, 19, 29, 30, 31 and the PF&R Training Center.

Battalion 3 is an active battalion for emergency calls and houses some of the busiest units in the City of Portland.  Battalion 3 stations enjoy a close working relationship with our neighboring fire agencies in Gresham, Clackamas, and the Port of Portland.

I began my career with Portland Fire in April 1988. This was a return to my home town after working for Douglas County Fire District #5 near  Roseburg,Oregon.

I spent the bulk of my years as a firefighter at Station 1, known as the "Big House".  I worked in the technical rescue program which provides rope rescue, trench collapse rescue, confined space rescue, and structural collapse rescue.  I promoted to Lieutenant in 1996, Captain in 2001, and Battalion Chief in 2008.

I remember being sworn in on the third floor of the Central Fire Station #1 by the Fire Chief.  During the ceremony, I could hear the bells steadily hitting and the sirens of fire apparatus as they left the station floor two floors below.  Even though I had already been a professional firefighter, I could not believe I was being given the opportunity to become a Portland Firefighter.  I was excited and nervous about the challenge that lay ahead.

Early in my career, I was caught in an explosion with two other firefighters while approaching the front of an old building located on Portland's lower east side.  The building was well involved in fire but was starved of oxygen.  As we approached, a big fireball erupted from the storefront windows knocking all three of us into Burnside Street. We all received burns and one firefighter sustained additional injuries. This experience taught me a new respect for the dangers of the job.

As a Battalion Chief, I do not get the opportunity to cook like I did as a member of an engine or truck company. I do however get to enjoy the cooking of our many fine firehouse cooks!  Occasionally, I get talked into making homemade caramel corn for the firefighters at Station 7 where I am quartered.

The most enjoyable jobs I had prior to the fire service were working as a gondola supervisor at Big Sky of Montana Ski Resort in the Rockies and working in Yellowstone National Park.

The most difficult job I had before becoming a firefighter was working in a rock quarry crushing plant.  My earliest job was working with my father for a summer as a commercial fisherman in the dory fleet at Pacific City.

Attitude is everything. The job of a firefighter brings an endless number challenges and scenarios. The longer you do this job the more you realize there is no limit to what is out there that you have not experienced.  The firefighter that makes themselves a career long student of their position and approaches their work with humility and a positive attitude will set the standard for those that follow in their footsteps.

My summers are spent sailing and horseback riding with my family. We also enjoy going to the coast and taking the occasional road trip. In the winter, skiing takes center stage. Our family enjoys Mt. Hood Meadows and an occasional trip to Mt Bachelor with friends.  Music is also a huge part of my family’s life. My two girls Allison and Anna play piano and recorder like their mom. I try to keep up on the guitar.

When I arrive on scene, my first thought goes to the safety of my crews and the public.  As a battalion chief, it is my job to concentrate on the "big picture" while my firefighters get their job done.

I am constantly evaluating the scene for hazards to life. This can include uncontrolled traffic, power lines down, structural issues or rapidly changing fire conditions.  We cannot be effective at helping others if we have not secured the emergency scene.

Treat others as you want to be treated yourself.