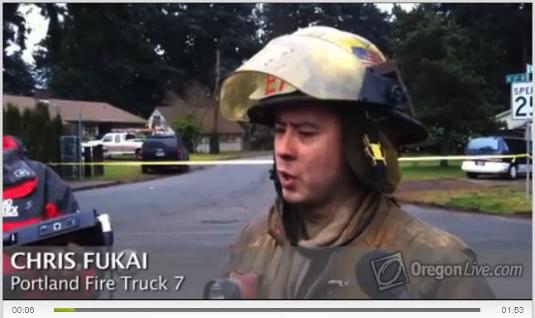 Video above courtesy of The Oregonian at www.oregonlive.com

Investigators determined that the early morning fire at 1307 NE 111th was accidental in nature and believe it was a result of household items that were too close to a fireplace. It appeared that the burning of construction materials and other debris had been a practice. A length of tree wood, too large for the firebox, was found sticking out of the fireplace. Investigators were unable to locate a smoke alarm while processing the scene.

The estimated value of the home and its contents was $150,000; fire investigators have determined that the home is nearly a complete loss.

Portland Fire & Rescue also has updated information that a firefighter sustained a minor burn injury while fighting the fire. 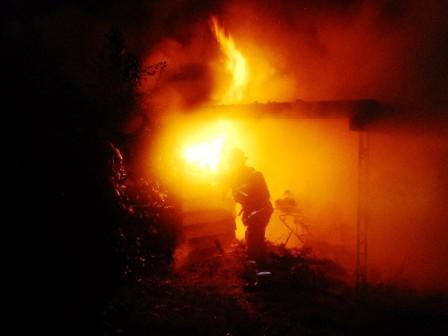 At 5:03 am, Portland firefighters responded to reports of heavy fire coming from the back side of a house located at 1307 NE 111th.  Firefighters from Portland Fire Station 30 (Gateway) arrived first on scene and began pulling hoselines to the fire.  Neighbors came up to firefighters and reported that one individual lived in the home and they had not seen him come out.  Firefighters launched an aggressive search for the individual right away. 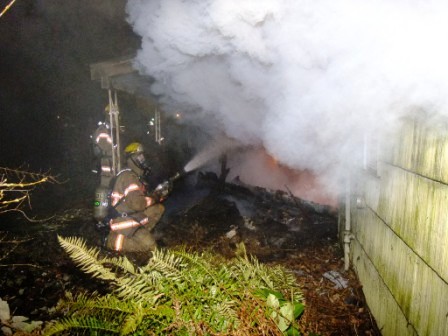 While searching the home, firefighters encountered heat and zero visibility due to the smoke.  They performed a systematic search of the rooms.  Firefighters were hampered in their search by an excessive amount of contents in the home.  Firefighters located a victim in his bed in one of the bedrooms.  They took the victim to the floor ready to rescue him when some of the home's excessive contents fell on him.  Firefighters had to uncover the man to find him and eventually evacuate.  Firefighter/paramedics determined that the man in his 50's had died. 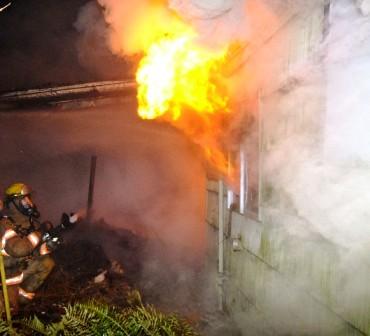 Firefighters also had a challenging time getting hose lines in to fight the fire which was active in the first and second floor walls of the home.  Firefighters had to move contents away from the walls before they could attack the blaze.  This is a serious safety hazard for firefighters.  Additionally, the excessive fuel load caused the fire to burn longer and hotter.  It took approximately 50 minutes to bring the fire under control.  The house is severely damaged and fire investigators are on scene working to determine the fire's cause.  The coroner's office was also called to the scene. 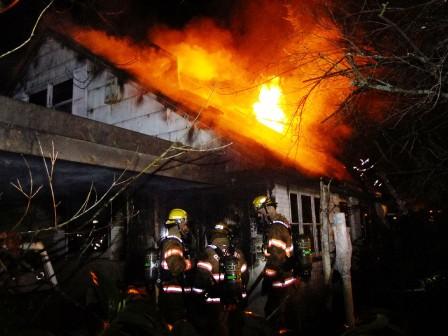 This is the second fire this week in Portland where excessive contents in the home have hampered firefighters’ ability to contain the blaze.  Although it's uncomfortable to talk about, hoarding can indicate a mental health disorder - one that affects between 6 and 15 million Americans.  75U.S.cities have community task forces specifically designed to help address the issue.

Portland Fire & Rescue wants citizens to understand that hoarding is both a personal and public safety issue. If you or someone you know may have an issue with excessive accumulation of contents in your home, please check out the following tips and resources.  The hoarding phenomena is both layered and complex.  Recognizing there is a problem is the first step; the next is seeking effective treatment if simple anti-clutter strategies don't work.

For additional information and resources for those with hoarding disorder and their families, please visit the International OCD Foundation’s website at http://www.ocfoundation.org/hoarding/.

A fact sheet on hoarding has been posted to Portland Fire & Rescue’s website at http://www.portlandonline.com/fire/blog.