The identity of the man who was found dead in an upstairs hallway by firefighters has been released by the Medical Examiners Office. He is Bradley Hays, a 38-year old male from Portland.

Investigators have placed a preliminary value on the structure and contents at $220,000 with monetary losses totaling $60,000. While investigators have determined the cause of this fire to be accidental, the exact cause is not being released at this point.

Please note that the corrected address is 438 N. Failing Street. 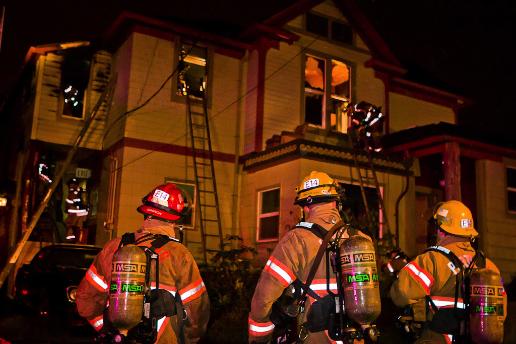 At 3:54 am, Portland firefighters were dispatched to reports of heavy fire at 438 N. Failing St.  When firefighters from Portland Fire Station 24 (Overlook/Swan Island) arrived first on scene, they encountered multiple occupants evacuating out of the basement and first floor windows, as well as heavy fire coming from the back of the two-story home. 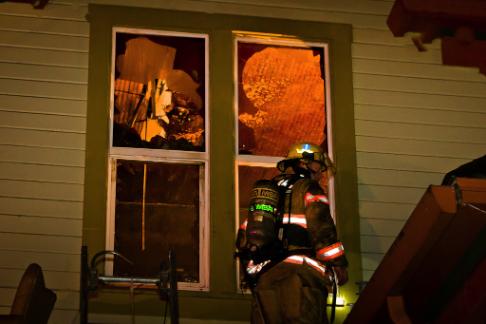 Reports indicate that two people who were sleeping in the basement at the time of the fire were woken up by the lights of the fire engine that pulled up in front of the house.  Apparently many rooms in the home were rented out to individuals.

Firefighters were urged by occupants who had already escaped the fire to search the second floor for trapped victims.  When a ladder truck crew from Portland Fire Station 13 (Lloyd Center) entered the second floor to perform search and rescue, they were met by high levels of heat and smoke.  Portions of the second floor had burned through in the blaze causing hazardous conditions inside for firefighters.

"Conditions were so hot that we crawled on our stomachs to perform the search," said Station 13 Captain Rob Hutchens.  "Our helmet shields were melting.  We knew we had to get out, but we gave it one more shot.  That's when we found a man in the hallway."

With one firefighter at the man's head and another firefighter at his feet, they carried him downstairs to waiting Portland firefighter/paramedics.  It was determined that the 39-year-old man had died.

There were four people in the house at the time of this morning's fire.  Fire investigators have determined that there were no working smoke alarms in this home.

"With the second fire death in three days, we are urging citizens to make sure they have a smoke alarm in every sleeping area and on every floor of their home," said Portland Fire & Rescue Public Information Officer Paul Corah.  "We just can't stress enough how important it is."

A total of five engines, three ladder trucks, three chiefs, five fire investigators, and 50 personnel responded to this incident.  Fire investigators are working to determine the cause of the fire and damage estimates.  The Red Cross responded to assist two of the adults who need assistance with shelter and clothing.