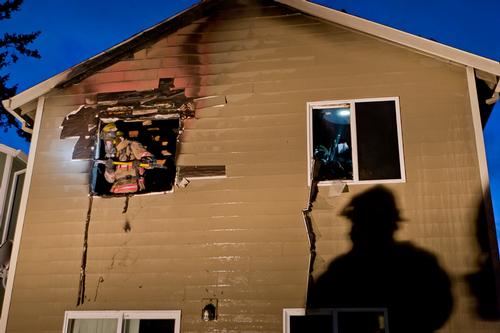 At 5:56 pm, Portland firefighters were dispatched to reports of smoke billowing from a house on fire at 4536 NE 99th Avenue. Firefighters from Portland Fire Station 12 (Sandy Blvd.) arrived first on scene in just two minutes to find flames coming from the back of the house and windows shattering.

The Incident Commander immediately called for a shut down of NE Prescott Street as engine and truck crews responded from surrounding fire stations.

Firefighters from Portland Fire Station 2 (Parkrose) laddered to the roof and cut holes to vent the heat and smoke. Engine crews inside the home made an aggressive attack to knock down the blaze. After extinguishing the body of fire, firefighters used pike poles to pull the entire second floor ceiling and search for hidden fire. The fire was brought under control at 6:23 pm. 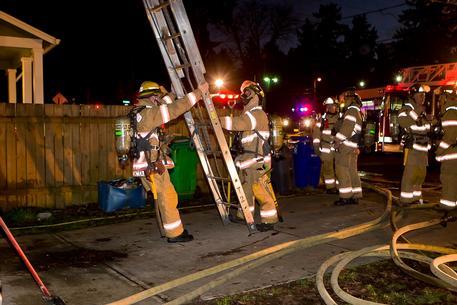 At the time of the fire a mother and her three children ages 7, 13, and 15 were not home. The family, who was renting the home, does have renter’s insurance. The Red Cross has been called to the scene to help the family find alternate housing tonight.

A fire investigator is currently on scene working to determine the cause of the fire and damage estimates.