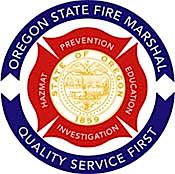 Oregon State Fire Marshal Wallace believes that there are many Oregonians all over the state who have made contributions in fire prevention and fire prevention education and he wants to hear about it.  Nominations can come from anyone – including the general public and fire service members.

The nomination deadline is March 30, 2012. State Fire Marshal Wallace will present the awards during the Oregon Fire Service Meritorious Awards Banquet in May 2012.