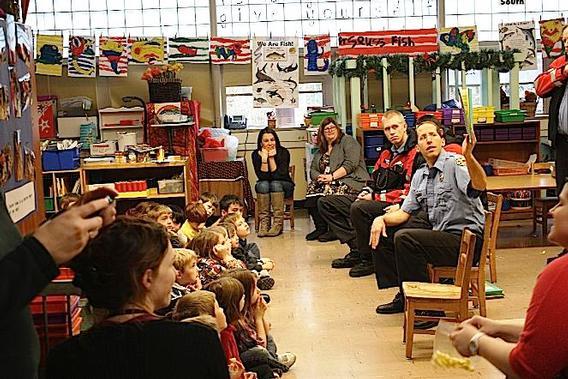 On Friday, March 2, 2011, Portland Fire & Rescue's Lieutenant Mike and Firefighters Josh, Robert, and Cody from Station 18 C-shift helped celebrate "Read Across America" by visiting and reading books with kindergarten students at Maplewood Elementary School. Maplewood Elementary School is part of the Portland Public School system, is located in SW Portland, and is known for its emphasis on a well-rounded education for all students.

Read Across America is a program launched by the National Education Association to focus on the importance of reading with children. Over 45 million readers across America took part in reading celebrations today meant to promote reading in children and celebrate one of the greats in children's literature, Dr. Seuss. 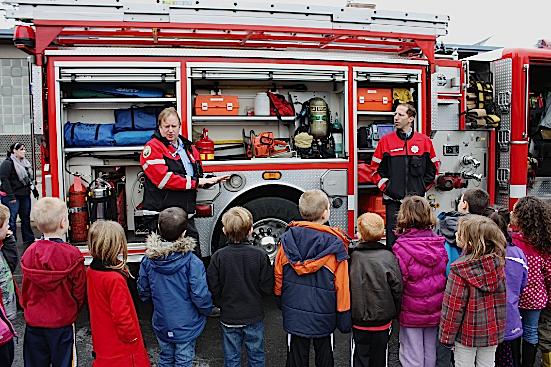 Students sat quietly and respectfully listened to the firefighters read their favorite books.  Afterwards, the firefighters answered student’s questions about what it is like being a firefighter, gave a short fire safety talk, and took students out to the schoolyard for a tour of Engine 18.

Portland Fire & Rescue’s (PF&R) Station 18 has been serving far southwest Portland and Multnomah Village for over 60 years.  The station has been located at 8720 SW 30th Avenue since 1961. Station 18 is a proud part of the rich history of the City of Portland and PF&R. In 1913, Engine 18 was the first gasoline-powered PF&R fire engine.

Today, Engine 18 is a 1991 Western States pumper with a 500 gallon booster tank and a 1500 GPM pump.  The engine and crew is often summoned to Interstate 5 and the Terwilliger curves, and is specifically equipped with foam to fight vehicle fires.  Station 18’s firefighters are trained in vehicle extrication and carry Jaws of Life rescue tool on the engine. Engine 18 also serves as part of PF&R’s Wildland Strike Team, responding to several Oregon wildland incidents in the recent years. Also housed alongside Engine 18 at Station 18 is Heavy Squad 18 and Brush Unit 18.

The future for Station 18 is exciting. To meet the demands of the growing city, Station 18 was relocated to a vacant garden center on SW Barbur Blvd. This temporary move will allow for the station to be seismically upgraded and remodeled with the use of General Obligation bond money. Improvements will include again, a seismic upgrade to bring the station up to current safety standards, as well as a remodeled interior and bay expansion to provide additional space for fire operations.

The interum Station 18 is located within blocks of the original station and emergency response times will not be affected. All structural modifications will maintain the integrity of the building's historical character. The estimated completion date for the remodel is March 2012.