Beginning in 1995, the City of Portland’s City Council has convened annually to publically acknowledge front line City workers and Bureau safety efforts. On February 8th, 2012, Certificates of Recognition were given to individual employees and groups who had been nominated to receive awards for achievements in the safety and health arena during 2011.

In City Council chambers, Mayor Sam Adams and Commissioners presented awards to recipients within their respective bureaus, while reading the nominee’s accomplishments. 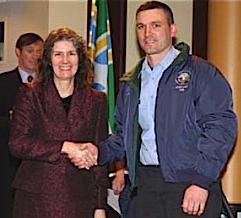 Portland Firefighter Jeremy Fraijo was honored with the “Top Safe Driver Award.” Commissioner Fitz thanked Fraijo for piloting a new aerial platform that larger and much more challenging to operate than equipment previously in use. 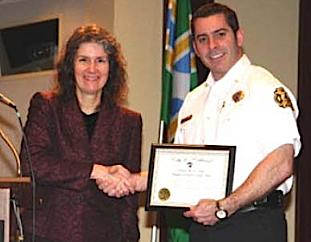 Safety Chief Todd Keathley accepted an award on Portland Fire’s behalf for achieving a significant reduction in losses during the fiscal year 2011 against an average of the previous three fiscal years.  Losses where recognized in the following categories of risk exposure:

Click here to see the other awards presented to recipients on Safety Recognition Day. Congrat's to all recipients!