At 6:31 this morning, Engine 11, Truck 25 and Rescue 11 were dispatched to reports of a traffic accident involving a car that had rolled over at the intersection of SE 92nd Ave and SE Division Street.

Lents Engine 11 assumed command upon arrival, and immediately assessed that the passengers in the vehicle, which was laying on its drivers side, were unable to self-extricate. Due to the position of the car, the occupant closest to the window was unable to un-click his seatbelt. Had he done so he would have fallen onto the driver, potentially causing further injury to both of them. 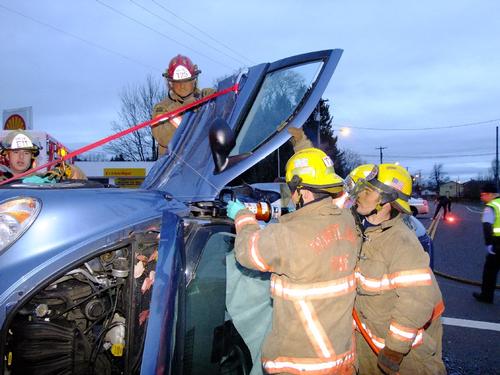 Woodstock Truck 25 arrived shortly after and quickly formulated a plan to extract the patients from the vehicle. Trucks differ rom Engines in that they do not carry water or have a pump. Like giant rolling hardware stores, Trucks carry specialized power tools like gasoline and electric powered saws and the Holmatro Tool, a hydraulic extrication tool similar to the "Jaws of Life". Truck companies are absolutely essential on a vehicle accident like this for the added equipment and personnel. 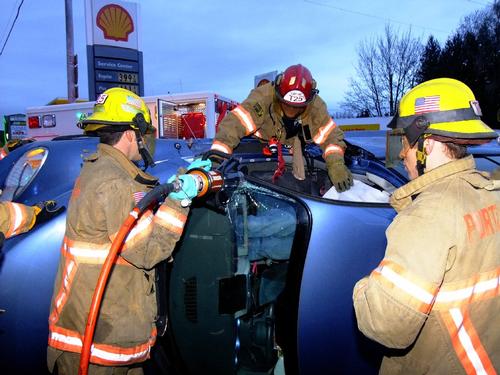 After stabilizing the vehicle using blocks carried on trucks, the Truck 25 crew began cutting the doors, roof and windshield off. This task was done methodically, to avoid making the vehicle unstable and further injuring the occupants and firefighters. Engine 11 and Rescue 11 prepared to provide medical care and staffed (2) charged hose lines to protect those on scene in the event of a fire during operations.

The driver was removed from the vehicle first, followed by the passenger and were evaluated on scene by Engine 11 and Rescue 11's crew. Both occupants were transported to an area hospital with non-life threatening injuries.

Extrication of both patients took a total of 18 minutes.

Not all accidents are the result of human error, sometimes it actually because of the defective parts. This also car owner should consider in order to avoid accidents involving cars.