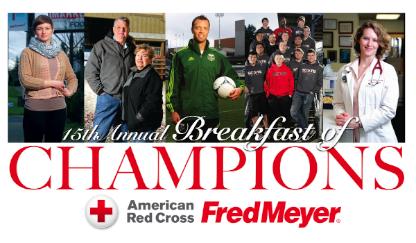 March 7, 2012 -- Representatives from Portland Fire & Rescue (PF&R) attended the 15th Annual Fred Meyer Breakfast of Champions this past Tuesday morning at the Oregon Convention Center to help honor local heroes who jumped into action and used their skills and smarts to save lives. PF&R’s Truck 2 also helped set the stage at the Convention Center for a fun and entertaining breakfast atmosphere.

The Breakfast of Champions is the Oregon American Red Cross’ signature event to not only honor heroes but to raise funds to support disaster relief, CPR/first aid training and other services throughout the Oregon Trail Chapter's 16-county service area.

Portland Fire & Rescue is proud to help honor these individuals that exemplify courage, kindness, and unselfish character through their acts of heroism in our local community.

More About the Red Cross
In Oregon, the Red Cross responds to an emergency once every 16 hours, but the Red Cross does much more than just disaster response. The organization trains everyday people in lifesaving skills. It assists members of the military and their families. It provides transportation to essential appointments for the elderly and disabled as well as warming centers in response to particularly cold nights in the winter. The American Red Cross also educates the community about emergency preparedness and reconnects families separated by war or disaster.

For more on the American Red Cross, or the Oregon Red Cross chapter, visit www.oregonredcross.org.