At 4:15 pm firefighters from Portland Fire & Rescue and Gresham Fire & Emergency Services were dispatched to reports of a single car accident at NE 162nd Avenue and NE Fargo Street. Witnesses reported seeing a vehicle crash into a large tree before coming to rest in a deep ditch filled with water on the side of the road.

Gresham Fire Engine 74 arrived first on scene and encountered the vehicle submerged in over a foot of standing water with multiple victims trapped inside. Firefighters quickly determined that because of the severity of the crash, location of the vehicle, number of occupants pinned-in, and the steep terrain, they needed additional resources at the scene. In total, four fire engines, two ladder trucks, and three ambulances responded. 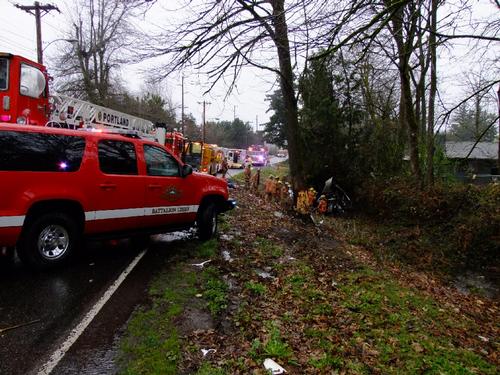 Truck firefighters from Portland Fire Station 7 (Mill Park) and Gresham Fire Truck 71 worked together using extrication tools, including the Jaws of Life, to cut two patients out of the wreckage of the car. Meanwhile, firefighters from the three Portland and one Gresham fire engines administered patient care and maintained safety at the scene. Because of the depth of the ditch and steep incline, firefighters used low angle rope rescue techniques to get the patients up to the road to the awaiting ambulances.

According to Portland Fire & Rescue Battalion Chief Kevin Shanders, "This was a very severe crash requiring multiple resources and specialty technical rescue techniques. The great teamwork and communication between both fire departments achieved the best possible outcome in a difficult situation."

Two patients were transported in critical condition to an area hospital and two victims were pronounced dead at the scene. The Portland Police Bureau's Major Crash Team is investigating the cause of the accident. 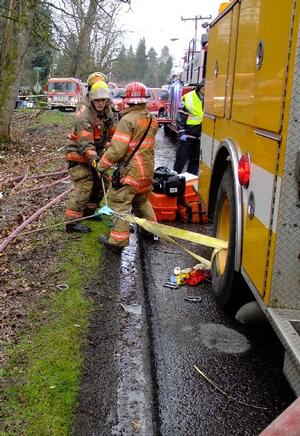 Portland Fire & Rescue reminds citizens to take extra precautions when driving in inclement weather. Give yourself extra commute time, drive cautiously, adhere to speed limits and traffic laws, and increase your following distance between cars. In weather like today's, both visibility and stopping ability may be greatly decreased.