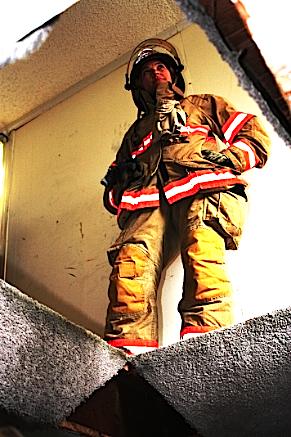 Portland Fire & Rescue (PF&R) is pleased to announce that Lieutenant Aimee Rooney has been awarded the 2012 Firefighter of the Year.

Lieutenant Rooney began her career at PF&R in 1996. Currently, Rooney is working at Station 3 in NW Portland as a lieutenant. She has previously worked as a firefighter and lieutenant at the Training Facility in NE Portland and at stations across the City of Portland.

Within the Fire Bureau, she is an active and contributing member of the Budget Advisory Committee and Peer Support Team. Rooney is also a member of PF&R's Honor Guard and organizes training sessions, coordinates numerous requests for honor guard participation, and communicates with all members of the team to ensure they are kept appraised of the opportunities available. She worked tirelessly to coordinate the Honor Guard participation in 9/11 ceremonies last year and works hard to improve the Campbell Memorial.

Captain Greg Ennis works directly with Rooney at Station 3. "Lieutenant Rooney has long been regarded as having excellent judgment and decision making capabilities at emergency scenes. She has had the confidence of chief officers to run high rise emergencies with chief officers on scene." Ennis notes that Rooney is one of the hardest working officers in the Fire Bureau. "She has always had the safety of her crewmembers foremost in mind at any emergency scene and insures she is always properly equipped for the emergency to display the proper example to her crew."

Rooney is known throughout the Fire Bureau as a person who has integrity and character. Firefighter Brad Martin at Station 3 feels that Rooney is proof positive that a great attitude makes every organization better. Martin explains that, "Her positive attitude is viral, and everyone around her becomes infected. If someone at the station faces a problem or makes a mistake, her example shows that a positive attitude will help us solve it or bounce back from it. A great attitude makes everyone and everything better, from a strenuous workout to a long complicated overhaul operation, from an all day drill to an early morning fire watch."

As compassionate as Rooney is at work with her crew, her positive attitude and giving spirit continues off the job during her personal time. Rooney has twice gone to Mexico to help build housing with her church group. She has organized firefighter standbys for a little girl who was seriously burned by her father. Aimee and her husband have also adopted two special needs children from another country, giving them love and the assurance of a better future.

Rooney joins 36 other Portland firefighters honored previously with this prestigious award. Rooney, however, is the first woman firefighter to be honored. 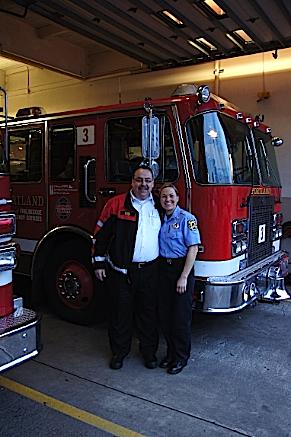 Fire Chief John Klum notified Lieutenant Rooney this morning that her peers had nominated and selected her as the Firefighter of the Year. Klum believes Rooney is deserving of the award.

"Rooney continually acts and performs beyond the call of duty." Klum goes on to say, "She improves the quality and efficiency of Fire Bureau programs, procedures, and objectives and she is an exemplary example of personal integrity, character, and citizenship."

Rooney will be honored at the PF&R's Spring Award Ceremony, the annual Russ Lemmon Memorial Award Banquet, and will ring the bell during the David Campbell Memorial Service in June 2012.