Updated with Fire Cause and Damage Estimates

Portland Fire & Rescue's Fire Investigators have determined the cause of the house fire at 10155 NW Wilark Avenue. The cause was determined to be accidental and started when embers from the fireplace exited the firebox and came in contact with combustibles near the fireplace. 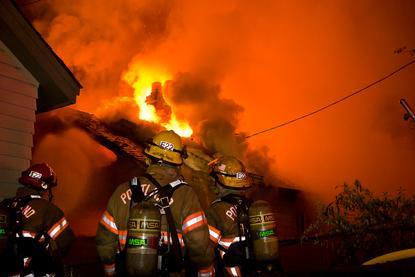 Portland Fire & Rescue responded to a house fire at 10155 N. Wilark at 12:20 am on Sunday, March 18, 2012. When Portland Fire Station 22 (St. Johns) arrived at 12:25 am, they found fire coming from three out of four sides of the two-story home. The resident, a 67 year old male, had gotten out of the house, but suffered smoke inhalation and was transported by AMR to Emanuel Hospital. His condition at the time of transport was stable. 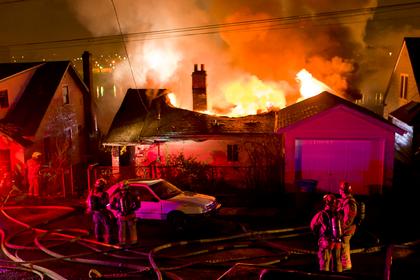 The fire was so large, that it could be seen from the St. Johns Bridge and across the river into St. Johns. Firefighters determined that the fire could only be stopped by taking a defensive strategy. This means that all fire crews fought the fire from outside the home while protecting the homes neighboring the house. It took firefighters almost 2 hours to get the fire under control which was at 2:15 am. And at 6:45 am, one fire engine was still at the scene working. 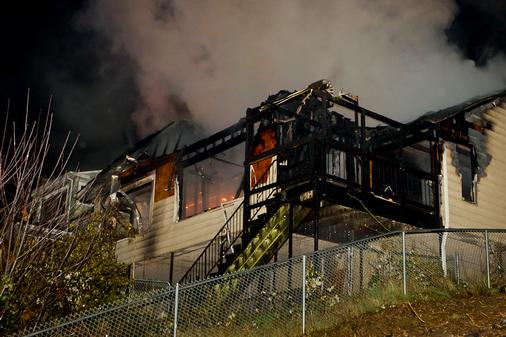 Firefighters have to be extra careful when fighting fires for this length of time. Fatigue and heat exhaustion can become a factor with the fire crews. A rehabilitation apparatus was brought in to assist. This apparatus provides water, food, a place to rest and a bathroom for these types' of long incidents.
St. Helens road was shut down during those two hours of firefighting. A ladder truck and engine were placed on the highway to shoot water from below the burning home. This helped crews get water on the fire from a location that was difficult to reach on foot.

A fire investigator was on scene and the cause is under investigation. Sauvie Island's Volunteer Fire Department also assisted Portland Fire & Rescue. No other injuries occurred.