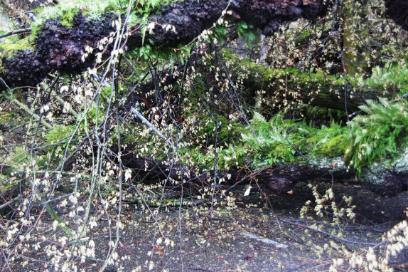 At 4:15pm ladder truck firefighters from Portland Fire Station 4 (Portland State) responded to reports of a person trapped under a big tree that had just fallen at the corner of SW Park and SW Jefferson in downtown Portland. When Truck 4 arrived, firefighters discovered that a one hundred-year-old, 150 foot tall tree had fallen across SW Jefferson St. Bystanders near the tree pointed firefighters to an area where a person was yelling for help. Fearing the worst, firefighters quickly retrieved chainsaws to cut out the individual who they presumed was trapped underneath the 30 ton tree. 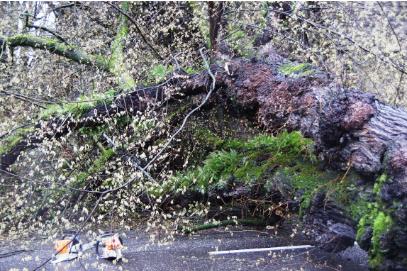 To firefighters' surprise, they found a 51-year-old female sitting in the middle of the downed tree's branches on the sidewalk. Firefighters parted the branches and gently helped the woman to safety. She was assessed by a Portland firefighter/paramedic and transported by ambulance to a local hospital with non-life threatening injuries.

"She is one lucky woman," Portland firefighters at the scene relayed. "One minute she was walking down Jefferson Street and the next this huge tree fell on her."

The large tree also knocked out stained glass windows in a nearby church. Portland Parks & Recreation was called to remove the tree. According to Portland Parks, most of the trees in the area were planted in 1908. There was no report of wind at the time the tree fell and the Parks Bureau is looking into what may have caused the tree to fall. It took crews several hours to cut up the tree and clear the street for traffic.