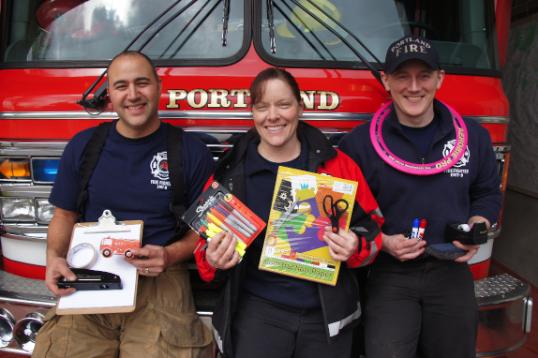 Firefighters from Portland Fire & Rescue’s Station 10 (Burlingame) provided mutual aid during the fire.  Firefighter Laurie, originally from PF&R Station 5 (Hillsdale), was working a shift at Station 10 and responded alongside her crew to the fire.

After seeing the devastation of the church’s preschool, Firefighter Laurie and her fellow firefighters from Station 5 decided to collect and accept school supply donations to be given to Living Savior Preschool.

Items such as office and craft supplies, paper towels, Kleenex, Ziploc bags, Band-Aids, cleaning wipes, napkins, M&D puzzles, kitchen toys and books will all be accepted from members of the public at Station 5 to later be given to the school.  Even gift cards to school supply stores or craft warehouses would be very useful.  Station 5 is located at 1505 SW DeWitt Street, Portland, Oregon 97239.

Thank you to Firefighter Laurie, Station 5, and the Rolling Hills Community Church for reminding everyone how much we can accomplish when we come together as one community.

Laurie, YOU ROCK! Thanks to you and your fellow firemen!