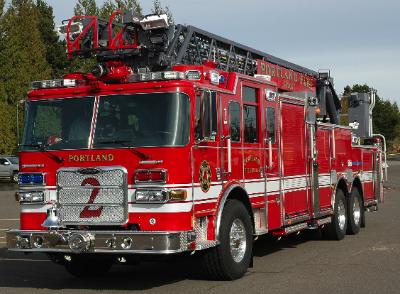 For the next couple weeks, firefighters assigned to the new Truck 2 will be getting used to operating, driving, and maintaining the 2011 Pierce Arrow XT 105’ rear mount aerial apparatus. Firefighters will also be studying the 70,800 pound truck’s gauges, buttons, motor, and brakes and practicing deploying the four H-style outriggers which stabilize the truck and allow the 105-foot ladder to extend.

"This truck was specifically built for Portland from the ground up," said Training, Safety & EMS Division Chief Glen Eisner. "We involved firefighters directly in the design process and traveled several times to Appleton, Wisconsin to assist in drawing up the plans, inspecting the truck, and helping to decide on last minute modifications.”

The new Truck 2 is powered by a 515 horse power Detroit Diesel Series 60 diesel engine, has a six-speed automatic transmission, an independent front suspension system, and a 360 degree rear and side mounted camera system.

On average, Truck 2 responds to over 1,000 emergency incidents each year and will call PF&R’s Training Center Campus in Parkrose home. In addition to Truck 2, Station 2 also houses an engine, rescue, and air unit.  Station 2’s emergency response area is bordered on the north by the Columbia River, Portland International Airport on the west, City of Gresham to the east, and I-84 to the south.