March 26, 2012 -- This past Thursday night, the Portland Trailblazers defeated the Memphis Grizzlies 97 to 93 before a sellout crowd of 20,636. Among the cheers were those from Portland firefighters and police officers who where there to celebrate and be recognized at the annual Blazer’s Police and Fire Appreciation Night. 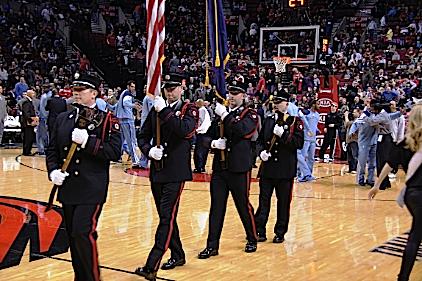 During the half-time festivities, the Blazers’ organization held a special ceremony that began with a presentation of colors by Portland Fire & Rescue's Honor Guard. 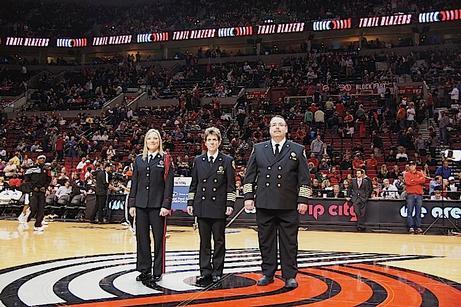 Portland Fire’s current Fire Chief John Klum and incoming Fire Chief Erin Janssens was then introduced to the crowd. Fire Lieutenant Aimee Rooney was also on hand and recognized for receiving the 2012 Firefighter of Year Award, a designation bestowed on her by her peers at PF&R.

The details given to me in your weblog site has been very useful, always study your publishing. thank you for publishing the details you have given and discussing with us. Wish you will continue to write full details like this Thank's you.

Awesome! Its truly amazing post, I have got much clear idea about from this paragraph.
http://straight2voicemail.com.au

I like the valuable information you provide in your articles. I will bookmark your blog and check again here frequently. I’m quite certain I’ll learn lots of new stuff right here! Best of luck for the next!
http://drfirasosman.com

I’m surely very pleased to look into this page content which has a lot of valuable material
http://americanmdcenter.com/en/services/porcelain-veneers

This is an awesome entry. Thank you very much for the supreme post provided! I was looking for this entry for a long time, but I wasn’t able to find a honest source
http://godamwale.com

Awsome article and straight to the point. I
am not sure if this is in fact the best place to ask but do you folks
have any thoughts on where to get some professional writers?
Thanks in advance
http://www.americanmdcenter.com

I am truly delighted to glance at this weblog posts which carries tons of helpful facts, thanks for providing these statistics
http://pmcc-india.com/why-pmcc

If you would really like to increase your experience simply keep visiting this website and be updated with all the latest news update posted here
http://cure-uae.com

Hello There. I found your blog using msn. This is an extremely well written article. I will be sure to bookmark it and return to read more of your useful info. Thanks for the post. I will definitely return.
http://drzainabalazzawi.com

Hi, all is going well here and of course every one is sharing facts, that’s genuinely fine, keep up writing.
http://godamwale.com

This blog is wonderful i like reading your articles.
Stay up the good work! You already know,
many persons are looking round for this information,
you can aid them greatly.
http://drfirasosman.com

I think this is among the most significant info for me. And i’m glad reading your article. But want to remark on some general things, The web site style is ideal, the articles is really great : D. Good job, cheers
http://lmc-uae.com

Awesome info and right to the point. I don’t know if
this is in fact the best place to ask but do you folks have any thoughts on where to
get some professional writers
http://www.eyebrowsbymais.com

Thanks for posting to gather