March 27, 2012 -- Portland Fire & Rescue was among those who received a “We Are Portland” award and were honored for working to help integrate newcomers into City life. 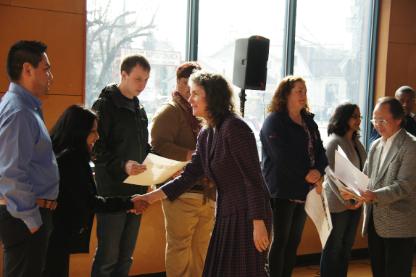 On Friday, awardees gathered at the Immigrant & Refugee Community of Oregon (IRCO) in NE Portland with Portland City Commissioner Amanda Fritz. Portland firefighters from Station 7 (Mill Park) and Station 24 (Overlook/Swan Island) were recognized with a “We Are Portland Award” for coaching teenagers, who hail from countries including Turkey, Ukraine and Rwanda, for the Portland World Cup Soccer Tournament in Summer 2011. 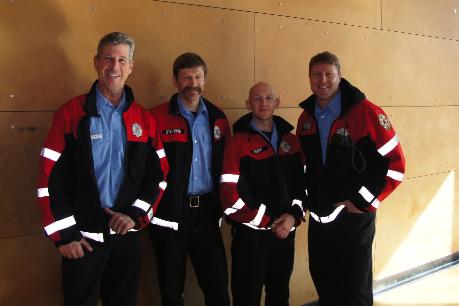 Station 7 Firefighters wait to receive the "We Are Portland Award"

In early 2011, Portland Fire & Rescue was approached by Alejandro Vidales, Portland Parks & Recreation Outreach Services Coordinator, to aid in bringing Portland's immigrant communities together with one another and the greater community through soccer practices and a three-day soccer tournament.

Portland firefighters jumped at the chance to show their support and help mentor immigrant and refugee youth.

"We made sure the kids had a good experience so that they have a good story to tell and a positive memory," said Portland Firefighter Dan Dove, Station 7, who noted that numerous players talked about becoming firefighters themselves someday.

This year, Portland firefighters will not only be coaching practices and showing their support to their teams at the three-day tournament, but they will also be hosting a “career day” at Portland Fire for immigrant and refugee youth. To learn more about the Portland World Cup, visit http://www.portlandworldcup.org/.