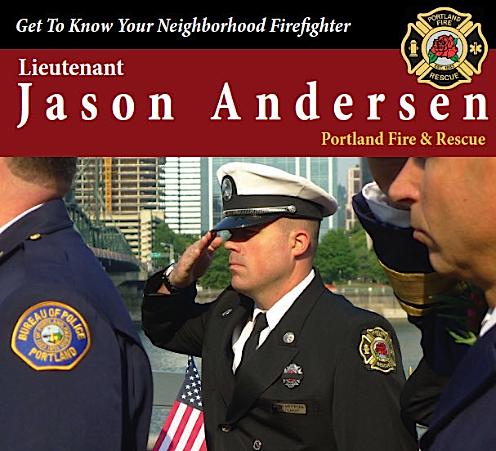 COMMUNITY I SERVE
I currently work as a Fire Lieutenant assigned to Pearl District Fire Station #3, affectionately nicknamed by the firefighters as the “Animal House”.  The Pearl District is a unique Fire Management Area which serves large commercial structures, industrial complexes, high rise occupancies, residential homes, and Jeld-Wen Field, the proud home of the Portland Timbers.

FIRST SHIFT MEMORY
It was my final shift as a recruit firefighter (black helmet) and the first minutes as a probationary firefighter (yellow helmet).  I had failed a testing station on our Truck 2 final.  My nerves were very intense.  I had completed my retake along with another recruit firefighter.  The time awaiting our results seemed forever.  All the efforts of the past 10 years of my life were hanging in the balance.  I was an emotional wreck.  Then two Training Lieutenants appeared, shook our hands, told us to call them by first name and not “sir”, and then congratulated us both on successfully completing the retake.  We entered the apparatus bay to see our shiny new yellow helmets with our names on it.  It was an emotional roller coaster, but the best day of my career.

MEMORABLE CALL
The first call I responded to as an intern firefighter was a motor vehicle crash with one vehicle landing on its roof.  I recall being nervous, excited, scared, and full of adrenaline as the siren wailed and we navigated through heavy traffic in the pouring down rain.  As we arrived, there was so much chaos with people injured, bystanders gathering, and fluids leaking from the wrecked cars.  What impressed me the most was watching my senior firefighters take this chaotic event and bring it to a sense of order, which allowed us to successfully render patient care.  I was hooked from that moment forward.

FAVORITE MEAL TO COOK
My favorite meal to cook is Traegerized Pork Ribs.  I use a spicy dry rub, smoke them for 8 hours while intermittently spraying them with apple juice.  After smoking them, apply a tangy BBQ sauce while soaking them in Dr. Pepper.  Cook them at 350 for one hour.  The meat just falls off the bones.  Served with a spicy chipotle potato salad…and it is a sure winner.  I did forget just how hot they were.   It was my first shift back on the line….I had all of my crew pouring sweat and drinking gallons of water.

MAKING MY WAY TO BECOME A FIREFIGHTER
Prior to getting paid by Portland Fire & Rescue, I started my fire service career in 1993 as an intern with Tualatin Valley Fire & Rescue.  This experience progressed to a long term internship with the Portland Fire & Rescue from 1994 to 1997.  I attended Chemeketa Community College in pursuit of my AAS in Fire Suppression from 1994 to 1996.  I obtained my Paramedic certification and worked for American Medical Response from 1997 to 2008.  I participated in the Reach and Treat Wilderness Rescue Team, Swiftwater Rescue Team, and Critical Care Transport Team.  While working at Portland Fire, I worked part-time as a Flight Paramedic for LifeFlight of Oregon.

BEING SUCCESSFUL
Self-motivation is the key to being a successful firefighter.  If you sit back and wait for things to happen, you will fall behind.  Success is based on how much effort you as the firefighter place into your daily performance.

OFF-DUTY FUN
My favorite off-duty activity is spending time with my family.  My wife and I enjoy traveling to tropical islands to SCUBA dive and enjoy the sun, sand and relaxation.

ARRIVING ON AN EMERGENCY SCENE
I look for anything that could potentially harm my crew.  The safety of my crew and I is paramount to anything else.  This starts from the moment I get dispatched and get into the rig.  My worst fear is a fellow firefighter getting injured because I missed something.  It is a huge responsibility, but I want each member of my crew to go home to their families without injury.

ADVICE TO LIVE BY
Retired Fire Captain Mike Glenn always said, “Do the right thing!”  It seems so simple, but yet sometimes it can be the hardest thing to do.  Prior to making any decision, I consider that simple phrase.