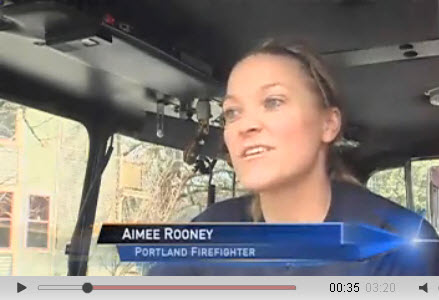 It is one of the toughest jobs around. Wearing more than 50 pounds of equipment you’re asked to haul hoses, climb ladders and fight fires at any hour of the day.

“It’s physically demanding but you just have to believe you can do it,” said Aimee Rooney, a veteran firefighter with the Portland Fire Bureau. Rooney was recently selected by her fellow firefighters as the Bureau’s Firefighter of the Year.

She’s the first woman to ever receive the honor.

“Amy is a great team player who serves the community even in her off hours,” said Erin Janssens.

Janssens who in June will become Portland’s first female fire chief says Aimee’s success is a sign of progress.

When she stared in 1988 Janssens was one of two female firefighters. Now Aimee Rooney works with 47 other women in the Portland Fire Bureau.

“At first we had to share dorm rooms and rest rooms with the men but that has all changed,” explained Rooney.

At Tualatin Valley Fire and Rescue Lydia Hachmuth has seen similar changes in her 10 years as a firefighter. She’s one of 17 TVFR female firefighters.

She does get frequent reminders that there’s still a ways to go in terms of public perception.

“Do you do all the cooking? Do you do everything the guys do?”

Hachmuth is often asked by the public. She does everything the guys do including wear the same clothing.

Hachmuth says she wears protective gear made for men and doesn’t know of a company making equipment for female firefighters. “The mask is loose because it’s made for a man so it’s hard to get a tight seal on the face,” she explained as she held a helmet which has to be tightened to fit a woman.

The Portland Fire Bureau and Tualatin Valley Fire and Rescue are both above the national average in terms of having female firefighters.

In Portland they make up 7 percent of the force, at TVFR they make up 5 percent, compared to 3 percent nationally. Both departments would like to recruit more women. In June the Portland Fire Bureau will offer a fire camp to women ages 16 to 19.

“Everyone, no matter what their size has something to contribute. There may be a crawl space that I can fit in because someone else can’t,” said incoming Chief Janssens.

It’s that teamwork and chance to serve the community that keep Lydia and Aimee coming back to work, along with the calls they never forget.

“In my early years I was working with a crew and together we pulled a child from a burning building.

That’s something you don’t forget. It was a life changing experience,” concluded Portland’s Firefighter of the Year Aimee Rooney.