At 12:38 pm, Portland Fire & Rescue responded to a report of a house on fire at 8533 NE Russell St. When Portland Fire Station 12 (Sandy Blvd.) arrived, the crew found smoke and flames coming from the kitchen. The occupant remarked that it seemed like a fire engine arrived so quickly it only took a minute --- actually it was two.

An individual who was home at the time of the fire indicated that he was getting ready to cook French fries in a pan of oil. He turned the pan on high to heat the oil and left the room for a short time. When he returned to the kitchen, the pan was on fire. He stated that he immediately removed the pan from the stove, set the pan in the sink, and turned water on the grease fire. 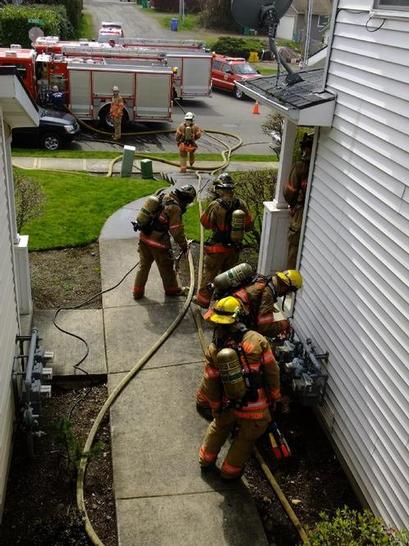 "What many citizens don't know is that you should never put water on a grease fire," said Portland Fire Public Information Officer Paul Corah. "It's best to always keep a lid nearby when you are cooking with grease and never leave cooking unattended."

Firefighters at the scene indicated that the fire spread quickly up the cabinets and into the walls of the kitchen. Crews quickly knocked down the fire and began ventilating smoke from the home. 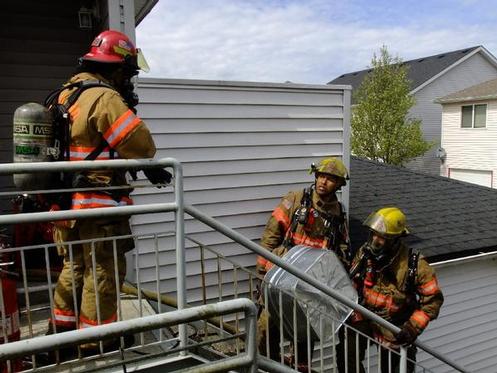 What should you do if a grease fire happens when you are cooking at home? Smother the flames by carefully sliding the lid over the pan and turning off the burner. Do not move the pan. The best advice is "when in doubt, just get out". Call 9-1-1 if you feel a cooking fire is out of control and leave firefighting to the professionals.

Damage to the home is estimated at $35,000 and the fire was ruled accidental by Portland Fire investigators.