This afternoon at 1:42 pm, Portland firefighters were dispatched to a two car motor vehicle accident at SE 96th Avenue & SE Market Street. Upon arrival four minutes later, firefighters from Portland Fire Station 7 (Mill Park) encountered one vehicle, a Toyota Prius, on its side with three occupants pinned inside.

Using knowledge they had recently acquired from training involving hybrid vehicles and specialized extrication equipment carried on ladder trucks, Truck 7 firefighters were able to disconnect and de-energize the hybrid vehicle's electrical lines to prevent being shocked in the process of extricating the victims from the vehicle. Using the "Jaws of Life", firefighters peeled the roof off the vehicle and got the driver and passengers out. The other vehicle involved had one occupant. 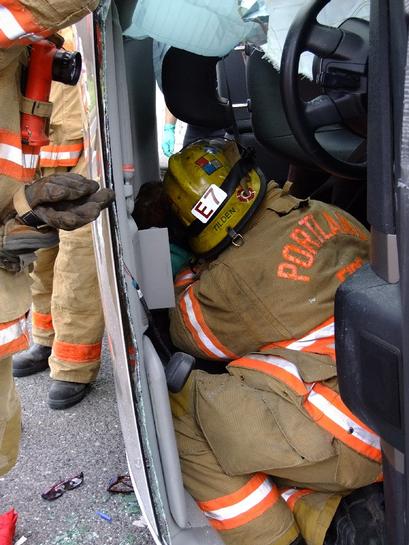 "As hybrids become more prevalent, we are progressively seeing more of them involved in traffic accidents," said Portland Fire & Rescue Captain Dave Davies. "We must take necessary precautions as first responders so we don't injure ourselves, or further injure occupants, when rescuing victims from vehicles with new hybrid technology."

One patient was treated at the scene by Portland firefighter/paramedics and three patients were transported by AMR ambulance with unknown injuries to Oregon Health Sciences University. 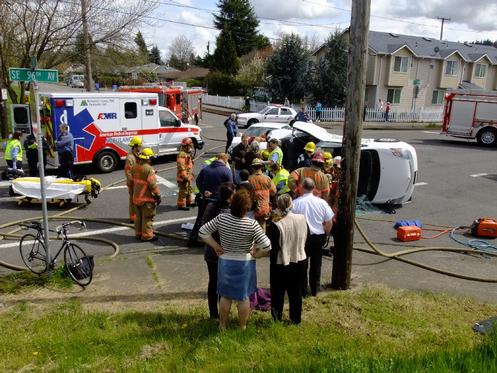 A small black dog named Zorro, with an electronic chip, escaped from the Toyota Prius and was last seen headed east bound on SE Market. Zorro is still missing at this time. If you find him, please take the dog to the nearest animal shelter or veterinary facility to access the electronic chip information.