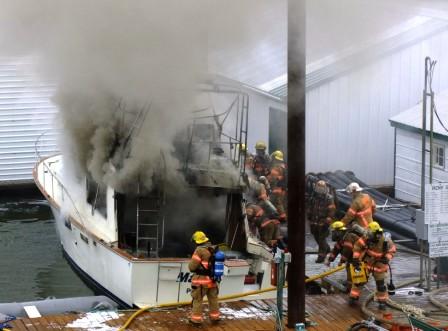 Portland firefighters were dispatched to reports of a boat on fire at 11:56 am on Tuesday, April 17, 2012. Reports indicated that the owner had just completed fueling the boat at the time the fire started. The 32 foot boat was approximately 10 feet away from the fuel pumps. The owner attempted tried to put the fire out with a fire extinguisher and suffered minor burns and smoke inhalation in the process. 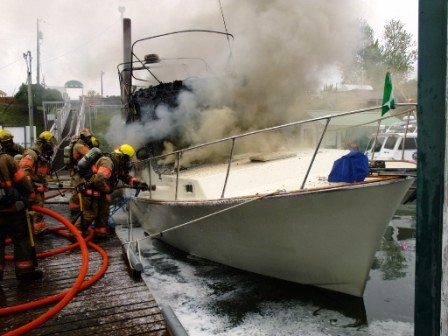 The Multnomah County Sheriffs Office and Port of Portland arrived on scene in two boats. Using their fire turrets, they sprayed water on the fire from the river. This helped keep the fire in check and from spreading down the dock prior to land based firefighters arriving at the scene. 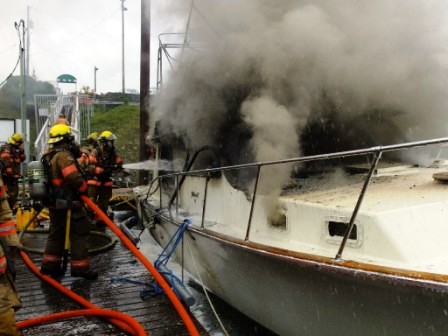 Firefighters from Portland Fire Station 14 (Alberta Park) arrived first on scene and brought hose lines from Engine 14 to the dock. Firefighters also used applicators to apply foam concentrate on the burning fuel inside the boat. The Incident Commander ordered firefighters off the dock and to assume a defensive fire attack position at 12:21 pm when water began filling the boat and mixed with fuel, which floated on the surface of the water and allowed the fire to spread more quickly. 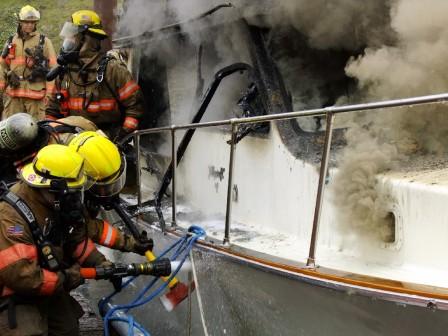 The Coast Guard was on scene to monitor for any environmental hazards and booming was placed around the boat to contain fuel spillage. Fire and rescue boats from Portland Fire & Rescue and the Port of Portland used portable pumps to pump the rising water and foam being used in firefighting operations out of the boat to keep it from sinking. 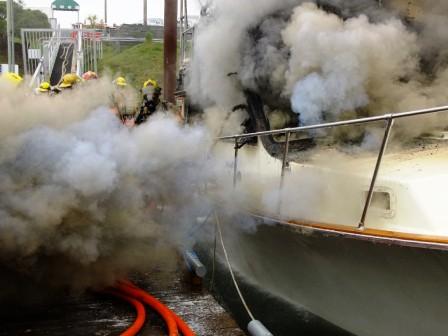 Fires on boats are dangerous because they carry large amounts of fuel and are moored close together; fires in marinas can quickly get out of hand and spread to nearby boats if not quickly contained.

A Portland fire investigator responded to the scene. The fire's cause is currently unknown and the damage is estimated at $150,000.

Portland Fire & Rescue is responding to a fire on a 32 foot boat that is reportedly close to fuel pumps at the Tyee Yacht Club located at 2929 NE Marine Drive. Fire crews are attacking the fire from a defensive position on the dock and a fireboat is also on scene. One patient is being treated for smoke inhalation and possible burns at the scene. Police have shut down Marine Drive eastbound at NE 33rd Avenue until further notice.

A Public Information Officer is headed to the scene.