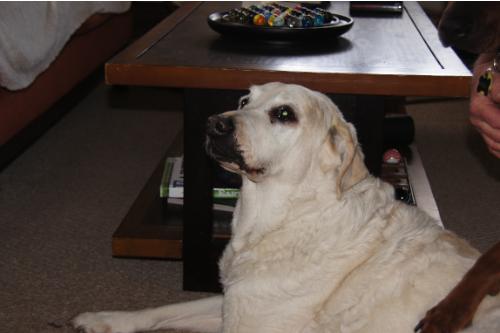 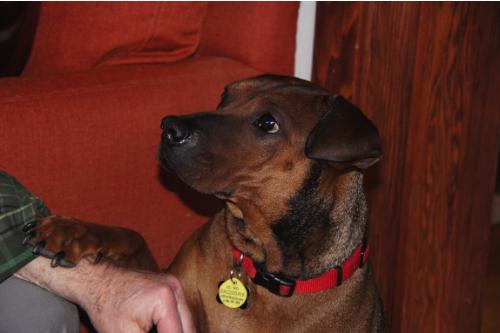 "It was a great day to sit out on my front porch with my dog," said Joann Nomeland. "Then all of a sudden I heard a high pitched sound coming from somewhere around my house. After circling my front porch and yard, and finding nothing, I could still hear the noise. I realized the sound was coming from my neighbor's house about 80 yards away. I didn't want to be "nosey", but it sounded like multiple smoke alarms. I quickly went to the door and I could smell smoke. I knocked on the door but no one was home - except for the two dogs that live there."

With the 1909 home filling with smoke and the dogs frantically barking inside, Nomeland called 9-1-1 and another neighbor, Chris Heaps. Heaps arrived to find the dogs inside and all doors locked. According to Heaps, "I used what I had available to get them out - my foot." Heaps broke down the front door and rescued Pica, a 40 pound mixed breed dog. After another attempt to rescue the second dog, Hana, Heaps recognized that the smoke was too thick and made a good decision to wait for Portland Fire & Rescue to arrive. Portland Fire & Rescue urges citizens never to enter a structure that is on fire.

At approximately 2:00 pm, firefighters from Portland Fire Station 24 (Overlook/Swan Island) arrived and were alerted that a dog was missing inside. Engine 24 firefighters quickly put on their air packs and searched the home for Hana, a 50 pound lab mix, who was hiding at the back of the house. They were able to quickly extinguish the fire, which was contained to the stovetop. Despite the fire's small size, it produced a large amount of smoke.

"I was cooking hamburger on the stove when I got distracted and left the house with the stove on," said homeowner Glenn Giere who returned a short time later. "I was shocked when I returned and found the neighbors and firefighters in front of my house. I'm lucky that the damage was not as bad as it could have been, and I'm thankful for my neighbors' quick actions to call 9-1-1 and help my pets."

Giere stated that his large, 103-year-old home has seven smoke alarms in it, which he credits for the early detection of this fire. Tonight, Giere is equally convinced of the power of knowing your neighbors. "It's nice to know someone is watching out for your home, your family, and your pets. It pays to know your neighbors."

At this time, both Hana and Pica are doing fine. A damage estimate from the fire is not available at this time.