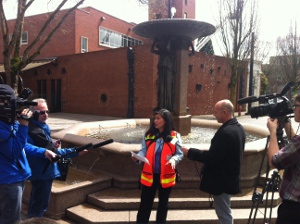 On Wednesday (4/18), the Portland Bureau of Emergency Management (PBEM) and Multnomah County co-hosted a brief walking tour in downtown Portland for Mayor Sam Adams and members of the news media. The tour took place in a part of the city known for its dense collection of old masonry buildings. Some of these buildings are reinforced against earthquakes; others are still seismically vulnerable. Click here for an Oregon Public Broadcasting story about the event.

This event happened in conjunction with the Portland Earthquake Project, a collaboration among Mercy Corps, Oregon Red Cross, U.S. Geological Survey (USGS) and PBEM. The group’s mission is to focus public awareness on the unique earthquake vulnerabilities in our region and to encourage preparedness. Three crustal faults travel through Portland while much of the entire West Coast of North America faces the threat of a probable 9.0 magnitude Cascadia subduction zone earthquake.