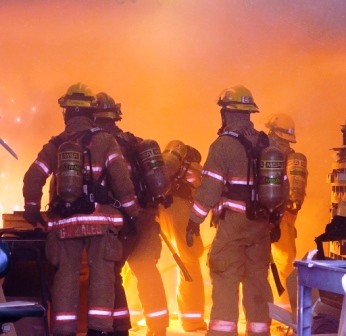 At 10:14 am, Portland firefighters responded to reports of magnesium shavings on fire at Oregon Engraving & Rubber Plates located at 2415 SE 10th Avenue. 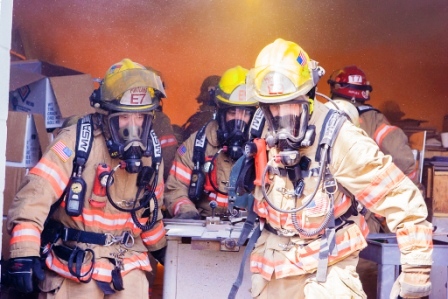 While en-route, 911 dispatchers informed crews that witnesses were reporting four-foot high flames and neighboring businesses were evacuating to safety. 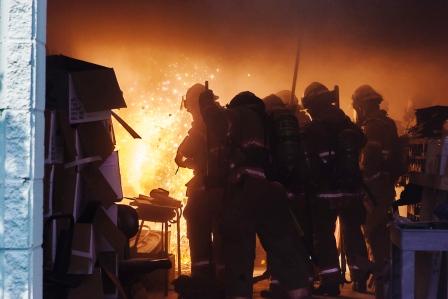 Firefighters from Portland Fire Station 21 (Eastbank/Hawthorne) arrived and reacted quickly, conducting a size up of the scene and then attacking the fire with dry chemical and CO2 extinguishers. Crews from Engines 1, 9, 13 and 21, Squad 1, Truck 1 arrived shortly to support suppression and venting operations. 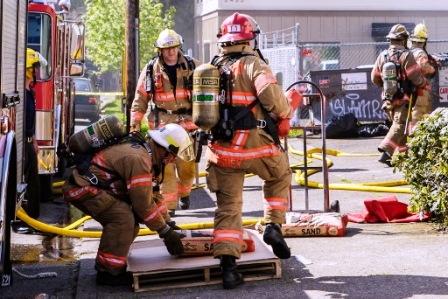 The fire was difficult to extinguish because it involved magnesium shavings and plates. Portland Station 7 (Mill Park) Hazardous Materials (HazMat) Response Team was then called to the scene to bring fire extinguishers for combustible metal fires.

According to HazMat Lieutenant Jeff Ripley, “The smoke that emits from magnesium shavings presents a serious health hazard if inhaled.  As a safety precaution, we evacuated neighboring businesses and civilians on the street to a safe location.”

A building supply representative next door to the incident contacted a battalion chief on scene and offered the use of 15 100-pound bags of sand which were eventually used to suppress the fire.

Firefighters are remaining on scene to pull the magnesium plates from the sand and utilizing the combustible metal fire extinguishers to fully extinguish the fire.