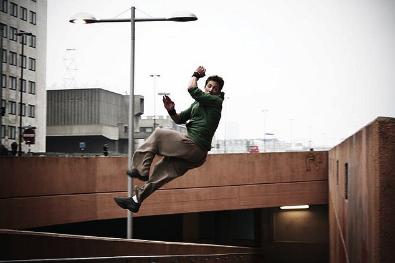 At 1:06 pm, Portland Fire & Rescue received reports of a man in his mid-20's who had fallen from the Steele Bridge into the Willamette River. At the time of the fall, the man was on the Steele Bridge engaging in a sport known as Parkour, which is a physical discipline that focuses on efficient movement around obstacles. He was going from one obstacle to another when he apparently missed the bridge, went over the railing, and fell into the water.

A fisherman that happened to be passing by at that time saw him and picked him up out of the water. He then called 9-1-1 and firefighters from Portland Fire Station 1 (Old Town) met the fisherman at the dock next to the Sternwheeler Portland (located at Portland's Waterfront Park). Station 1 firefighters transported the man to a waiting ambulance. His condition is unknown at this time.

"Despite the obvious safety risks involved, extreme sports continue to grow in popularity with young adults," noted Portland Fire & Rescue Public Information Officer Paul Corah. "When engaging in any extreme athletic activity, it is important that it's done with proper supervision, safety equipment, and within an appropriate area."

Parkour teaches participants how to move through their environment by vaulting, rolling, running, climbing, and jumping. There is no list of "moves"; each obstacle is approached individually. In many cases effective Parkour techniques depend on fast redistribution of body weight and the use of momentum to perform seemingly difficult or impossible body maneuvers at great speed. Absorption and redistribution of energy is also an important factor, such as body rolls when landing which reduce impact forces on the legs and spine, allowing an individual to jump from greater heights than those often considered sensible in other forms of acrobatics and gymnastics.