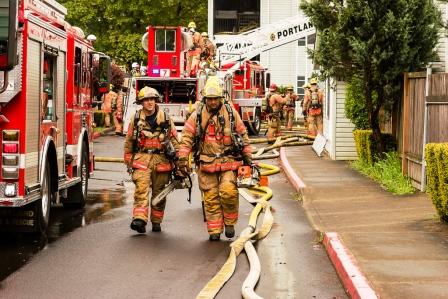 At 9:28 am, Portland Fire & Rescue (PF&R) responded to an apartment fire at the Trails End Apartments located at 11860 SE Powell Blvd. Crews from Portland Fire Station 7 (Mill Park) arrived on scene just three minutes later and could see a large amount of fire coming from the back of the apartment building. The crew of Engine 7 immediately pulled a hose line and went to the top floor (3rd floor) to extinguish the flames. 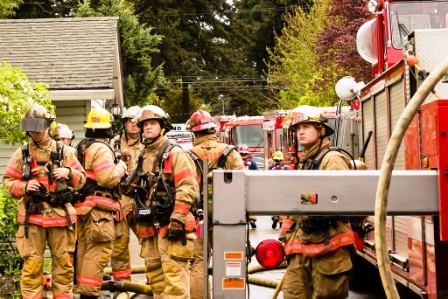 They encountered fire that had burned out the back of the building on the 2nd floor and lapped up and re-entered the building on the 3rd floor. Additional hose lines were deployed and fire crews aggressively attacked the blaze on both floors. The crew from Truck 7 went directly to the roof to cut ventilation holes in order to remove the fire and smoke from the attic and improve conditions for fire crews on the inside. 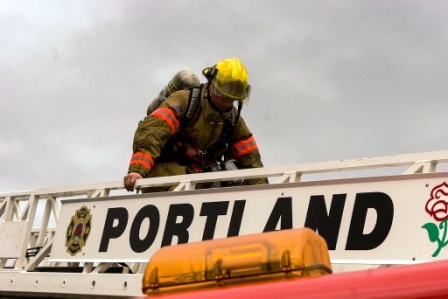 While attacking this blaze, fire crews searched each unit to make sure all the occupants had escaped. A second alarm was called at 9:41 am to bring additional fire crews to assist in the firefighting efforts. 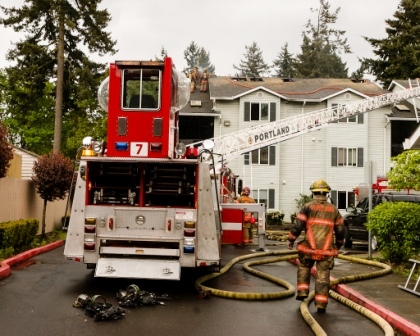 Fortunately, everyone escaped safely and there were no victims in this fire. However, a number of people have been displaced and Red Cross is on-scene assisting them with finding alternate housing.

Fire crews did manage to rescue five cats and two dogs from the fire and successfully returned them to their owners. Firefighters were able to deliver three cats (Gucci, Mia, and Smokey) back to one occupant who was relieved at the sight of his pets unharmed by the blaze. Fire crews were also alerted by a resident that two Chihuahuas were missing. Firefighters searched the unit and found one hiding under a blanket and one in a kennel. Both were returned safely to their owner.

Due to the efforts of both PF&R and Gresham Fire & Emergency Services, the fire was brought under control at 10:32 am. Fire crews remained on-scene to extinguish hot spots. A Portland Fire Investigator is on-scene working to determine the cause of the fire and damage estimates. This information will be released as it becomes available.

Portland Fire & Rescue wants to remind citizens of the importance of having a fire escape plan. When living in a building that houses many people it is especially important for all members of your family to know how to safely escape to a meeting place outside to help ensure that everyone is accounted for.

Portland Fire & Rescue is on scene at an apartment fire at the Trails End Apartments located at 11860 SE Powell Blvd. The fire has been upgraded to a 2nd alarm.

A PIO will arrive in five minutes. Media staging will be in the Safeway parking lot at SE 122nd & Powell.

Updates will be made as they become available.