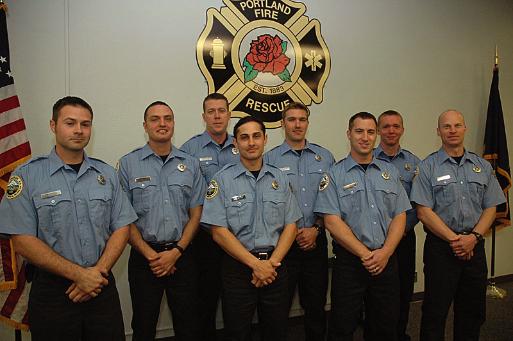 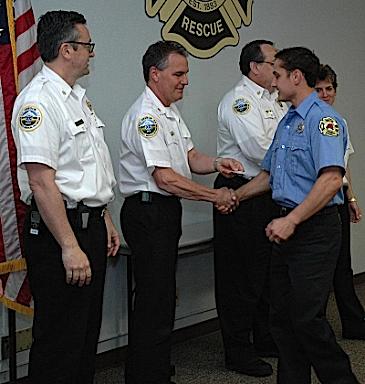 This morning, eight firefighter recruits were officially sworn in and presented with PF&R badges in front of family members, friends, PF&R firefighters, and command staff. Fire Chief Klum acknowledged the class’ accomplishments and personally thanked the recruits and their family members for their commitment while urging them to continue in their fire-service education and be safe.

The road for these young firefighters has been long. Members of Class 11-02 successfully completed an eight-week Training Program and a 16-week Recruit Academy. Class 11-02 then transferred to Station 2, a working fire station in the City of Portland.

Under the supervision of firefighter specialists and training officers, the firefighter recruits spent three months training on Station 2’s engine company, then three months on Station 2’s truck company.  During that time, they learned Emergency Medical Service protocol, practiced challenging scenario based evolutions, and responded on emergency calls in the community.

The eight successful Firefighter Recruits will now be transferred to stations around the City of Portland where they will spend another eight weeks of independent learning and continuing evaluation.

To contact the experts, all you have to do is to make a call on the Gmail Help Phone Number and let the experts diagnose your problem and then handle it. Amend any tricky situation, anytime you want with an efficient customer service to ensure problem-free experience of your Gmail account. Just dial the toll-free number +1(505) 384-8224 and the quick and quality service is ensured from the other side. http://www.gmailcustomerservicenumber.us

I was not able to sign in to my Gmail account, but this informative blog here helped me a lot and I got my Gmail account back to normal working. For any further information, one can also ring at <a href="http://www.gmailhelplinenumber.co.uk/">Gmail Support Number UK</a>

This very well written piece the language used is very much user-friendly this will prove of help to most of the antivirus users.
http://www.microsoftcontactnumber.co.uk/