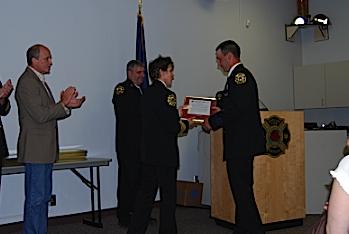 Each year, the City of Portland's Risk Management Division selects one city employee to receive its annual Safe Driving Award. This year, the prestigious award went to PF&R's very own Jeremy Fraijo. Firefighter Fraijo has been with PF&R since 1999 and is a current driver on the truck at Station 8 inNorth Portland. Fraijo has driven Engine 8 and as a tillerman on other trucks, which means he is responsible for steering the trailer of the ladder truck, allowing the unweildy vehicle to maneuver swiftly through the city while en route to emergencies. Tillering requires a great deal of focus and attention and the ability to react quickly and efficiently in heavy traffic. Safe driving is extremely important to PF&R since nationally, vehicle accidents are the second leading cause of on-duty deaths for firefighters. PF&R appreciates Firefighter Jeremy Fraijo's dedication to safe driving throughout his career.

Firefighter of the Year 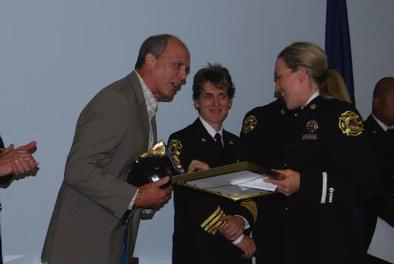 PF&R is pleased to announce that Lieutenant Aimee Rooney has been awarded the 2012 Firefighter of the Year. Lieutenant Rooney began her career at PF&R in 1996. Currently, Rooney is working at Station 3 in NW Portland as a lieutenant. She has previously worked as a firefighter and lieutenant at the Training Facility in NE Portland and at stations across the City of Portland. Within the Fire Bureau, she is an active and contributing member of the Budget Advisory Committee and Peer Support Team. Rooney is also a member of PF&R's Honor Guard and organizes training sessions, coordinates numerous requests for honor guard participation, and communicates with all members of the team to ensure they are kept appraised of the opportunities available. She worked tirelessly to coordinate the Honor Guard participation in 9/11 ceremonies last year and works hard to improve the Campbell Memorial. Rooney is known throughout the Fire Bureau as a person who has integrity and character. Rooney joins 36 other Portland firefighters honored previously with this prestigious award. Rooney, however, is the first woman firefighter to be honored.

PF&R Lieutenants Jamie Ziegler and Erica Nelson were recognized for their years of involvement and dedication as members of the PF&R Honor Guard. The Honor Guard was formed to bring honor and respect to PF&R, its members and their families by providing formal ceremonial representation at funeral services for retired, active, and line of duty deaths within PF&R. In addition the Honor Guard supports other fire and police agency LODD funerals at the PF&R’s directive. The Honor Guard also may perform duties posting colors at civic and public events such as ceremonies, sporting events, parades and memorials as deemed appropriate by the Emergency Operations Division Chief. In their roles as honor guard members, these two individuals have raised the standard of recognition and honor given to PF&R members, their families and the community at large. As a result, their assigned badges will be retired.

Certificate of Merit with Lapel Pin 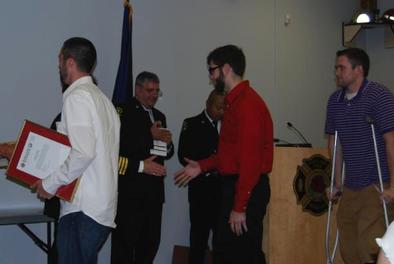 On November 23, 2011, Engine 13 responded to a citizen in need of assistance at the Matt Dishman Center Pool. The crew arrived to find the staff of the Dishman Center, including Evan Lilly, Ryan Elliot-Engles, Tony Smith, and an off-duty firefighter, performing CPR on an 80-year old male. The members of the Dishman staff were ventilating the patient with a bag valve mask, performing chest compressions and following the instructions provided by their Automatic External Defibrillator (AED). The staff was very competent and this in large part helped contribute to a good outcome for this critical patient.

Certificate of Merit with Lapel Pin 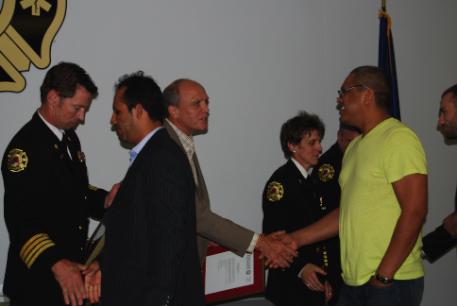 On December 9, 2011, a taxi cab driver had a medical emergency near the Jupiter Hotel on E. Burnside Street. The taxi drove through the wall of a hotel room and onto a man who was asleep in bed - pinning him underneath. Three civilians including Albert Abad, Salvador Candela, and Zach Miller, and an on-duty police officer quickly removed the driver from the vehicle and began the process of extricating the second patient from beneath the vehicle. With Mr. Abad behind the wheel, the other three picked up the front of the taxi and the vehicle was carefully removed. Without the quick response of these individuals, the trapped patient would have succumbed to his injuries.

Medal of Honor with Parchment Certificate, Certificate of Merit with Lapel Pin

On October 2, 2011, a house fire occurred at 10225 SE Boise. The furniture, walls and ceiling were quickly involved in a rapidly spreading fire. Betty Ann Moser, along with her son (Larry) and daughter (Regina) moved to escape the fire. However, Betty was hindered by oxygen tubing and mobility problems. Larry and Regina began to fight the fire with a garden hose and portable fire extinguisher. Neighbors were alerted to the growing fire and ran to assist Larry and Regina in their extinguishment efforts with additional garden hoses. Upon learning that Betty was still trapped inside, Steve Kristich unselfishly ducked under the smoke and flames at the front door to search for Betty. He found her, unhooked her oxygen tubing and dragged her bodily through the front door. With the help of Scott Ellis, they were able to move her off the porch to the safety of the front lawn. While this rescue was being performed, neighbors Alisha Ellis, Sheila Bennett and Tanesha Bennett knocked down the majority of the fire buying Scott valuable time. The efforts of all of these individuals helped save Betty from serious injury or possible death. Steve Kristich was awarded the Medal of Honor and Scott and Alisha Ellis and Sheila and Tanesha Bennett received the Certificate of Merit.

Medal of Honor with Parchment Certificate, Certificate of Merit with Lapel Pin 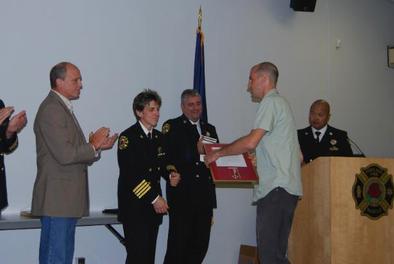 On March 4, 2012, PF&R was dispatched to reports of a man struggling in the water along the East Bank Esplanade. According to bystanders, a 37 year-old, developmentally delayed man suddenly entered the water and started swimming towards the public dock about 75 feet away. After several minutes of slow progress, he began to struggle and submerge. He was fully clothed and this combined with a 42 degree water temperature quickly tired the man. A bicyclist (Kevin Pratt) who had stopped for a break near this location observed the victim and determined he was in trouble. He stripped to his underwear and quickly swam out to the victim grabbing his collar. He began to pull him to shore trying to keep them both above water. Several times, they both went under and Kevin had to use all his strength just to make it back. By the time they reached shore, Kevin was exhausted and the victim was now unconscious. Another bystander (Isaac Bruder) entered the water and assisted in bringing the Kevin and the victim to shore where they both began CPR. Members of PF&R arrived and began definitive medical care. By March 6th, the victim was upgraded to serious condition and was released in a few days. Kevin Pratt placed himself in significant harm’s way in the performance of this rescue. Isaac Bruder also contributed greatly in assisting both Kevin and the victim to shore and assisting with initial CPR. Kevin Pratt was awarded the Medal of Honor and Isaac Bruder received the Certificate of Merit. 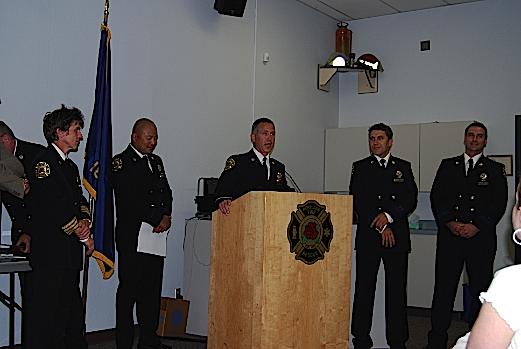 On January 25, 2012, at 11:30 pm., dispatch received a report of a person in the water near the East Bank Esplanade north of the Burnside Bridge. Members of Station One were dispatched with Rescue Craft One along with other members from Station 21. During this time, three civilians were attempting to assist the victim from their position on the esplanade. Sam Policar and Justin Wisdom were using their fishing poles although the victim was about 25 feet away from shore. The third individual, Daniel Sinclaire ran to nearby Station 21 to alert the crew there about the emergency. Mr. Policar continued to follow the victim as he drifted downstream. When the victim approached the east pier of the Burnside Bridge, the fast-moving current pushed him into the floating portion of the esplanade where Mr. Policar was able to get a hold of the arm of the victim’s jacket and hold him in place awaiting the arrival of Rescue Craft One. If Mr. Policar would have let go, the victim would have been quickly swept downstream and under a large mass of river debris that had accumulated due to the high water. He would have quickly been trapped and drowned. Rescue Craft One arrived staffed with firefighter Mike Held and Fire Medic Bill Schimel. They observed Mr. Policar and carefully maneuvered next to the victim’s position. Bill Schimel entered the fast-moving water in an attempt to pull the victim onto the rescue craft. The victim weighed about 250 pounds with his wet clothes and a backpack. Because of the very swift current, all Schimel could do was hold the victim’s head above water and hold on to the esplanade railing. Despite his efforts, the water continually pushed both his head and the victim’s head underwater. If Schimel tried to let go and move to the rescue craft, both he and the victim would have been swept under the debris field just below them. Schimel communicated to Held that he would not be able to hold on much longer but he also refused to let go of the victim. During this time, Held was busy attempting to keep the rescue craft close to Schimel and the victim without running into both. He decided to secure the rescue craft using the esplanade rail and instructed Mr. Sinclair to climb over the railing and hold onto the rescue craft so that he could use both hands in his attempt to grab Schimel and the victim. By himself, Held then bodily lifted Schimel and the victim up onto the rescue craft. All three then proceeded back to the dock at Station 21where the patient was handed off for transport to a hospital. This rescue would not have happened if not for the extraordinary efforts of Mike Held and Bill Schimel assisted by Mr. Policar, Mr. Wisdom and Mr. Sinclair. Sam Policar, Justin Wisdom, and Daniel Sinclair were awarded the Certificate of Merit, Firefighter William Schimel received the Silver Medal of Valor, and Firefighter Michael held received the Bronze Medal of Valor.