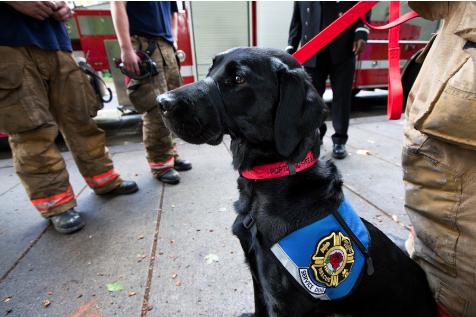 Out of 80 canine and handler teams across the United States, 21 Bureau of Alcohol, Tobacco, Firearms and Explosives (ATF) Accelerant Canine Teams are here in Portlandfor several days participating in an annual recertification. The recertification is being hosted by Portland Fire & Rescue (PF&R) Lieutenant Fabian Jackson and his Accelerant Detection Canine "Lila." Learn more about Lila and her job as PF&R's Accelerant Canine at http://www.portlandonline.com/fire/arsondog.

Firefighters such as Lieutenant Jackson solve arson fires with K-9 units, or accelerant canine. These accelerant canines are specially trained to sniff out evidence at the scene of a suspected arson crime. When there is a fire, the firefighters and police must try to figure out if the fire was an accident or intentional. The job of the accelerant canine is to help in finding that evidence which would point to a crime.

An accelerant canine is a dog which has been trained to respond to trace amounts of flammable materials which could have been used to start a fire. Materials like gasoline, hydrocarbons, among many others, are known as "accelerants," referring to the fact that they can be used to accelerate a fire. Accelerant canines are more properly known as accelerant-detection dogs, because they search for traces of accelerants which could be used to prove that a fire was caused due to arson.

During the recertification, each canine team's proficiency is tested (recertified) and the handlers are required to produce their training logs from the previous year.  Handlers are also required to attend formal training on the latest advances in canine health and safety, as well as legal updates, practical field exercises, and formal testing.

These canine teams, from the western and mid-west regions, are used at fire scenes to detect the presence of accelerants used to start fires.  The accelerant canines are trained to alert the handler when they detect the accelerants. These teams are deployed anywhere with in the United States and its territories.  While they are in Portland, they have been given a unique opportunity.

A house fire that occurred yesterday, Monday, May 14 at 6:32 p.m. at 4612 SE Malden Drcompletely destroyed the single story home. The cause of the house fire was accidental.  An unattended candle caught nearby combustibles on fire and with the windows left open, the fire spread quickly throughout the house. This fire scene is providing the accelerant canines and handlers an opportunity to work a recent fire scene.

Media is encouraged to contact Portland Fire & Rescue Lieutenant and Public Information Officer Rich Tyler with any questions or to schedule interviews using the media pager: (503) 940-6003.