Portland Fire investigators have determined that the cause of yesterday's 2-alarm fire at7939 SW 40th Avenuewas caused by improperly discarded smoking materials that were placed in a plastic container on a porch.  The building, which was valued at $2,060,000, sustained an estimated $970,000 in damage.

Portland Fire & Rescue reminds citizens to always dispose of smoking materials, or any other ashes, in a metal container with a secure lid.  It is also important to note that with the heat in the summer months, improperly discarded smoking materials can cause fires to start and spread even more rapidly than in cooler conditions.

Portland Fire & Rescue was dispatched to reports of an apartment building on fire at 7939 SW 40th (The Village at Multnomah) at 4:11 pm. Additional callers to 9-1-1 reported that they could see a black cloud of smoke and flames coming from the building and that a babysitter and child were possibly trapped inside one of the units. 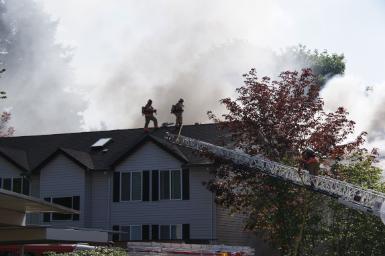 Firefighters from Portland Fire Station 18 (Multnomah Village) arrived first on scene three minutes after receiving the call. Firefighters immediately pulled a hose line and began advancing to perform a search and rescue of the babysitter and child in one of the fire units. They simultaneously called for a second alarm response, bringing additional firefighters and apparatus to help fight the fire which was spreading to additional units. 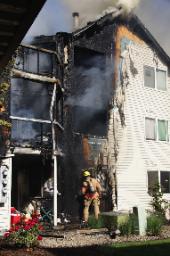 As firefighters searched for trapped victims, the flames and heat became so intense that firefighters were forced back out of the unit. Two firefighters received burns to their knees and wrists and suffered heat exhaustion. They were treated at the scene by Portland Fire paramedics and transported to the Emanuel Burn Center with non-life threatening injuries. Fortunately, it was later determined that the babysitter and child had safely escaped prior to firefighters' arrival. 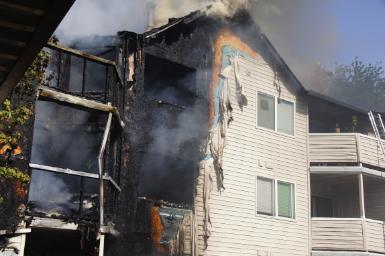 Six condominium units were involved in fire, which resulted in eight people being displaced including seven adults and one baby. While firefighters were attacking the blaze a firefighter fell through the roof but it was determined that he was not injured. The fire was brought under control at 5:00 pm.

Fire investigators at the scene have not yet determined the cause of this afternoon's fire or reached a damage estimate. Firefighters will remain on scene for the next several hours to clean up after the fire and monitor for hot spots. The Red Cross was called to assist people who were displaced by the fire with finding alternate housing.

A HUGE THANK YOU to everyone who helped put out the fire and do the investigations yesterday!
We are very grateful and pleased to have such a wonderful crew fighting for us and our properties and lives!!